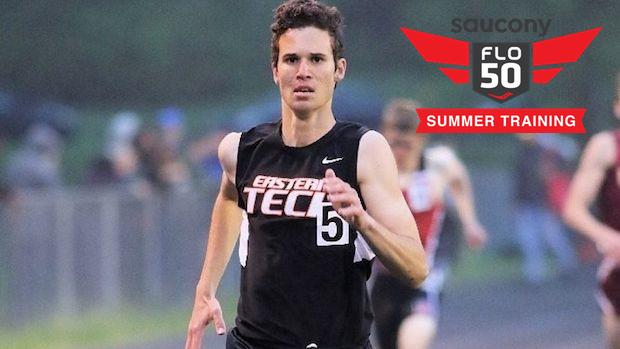 Eastern Tech rising senior Taylor Baranoski has run track in each of his first three years of high school, improving each season. He broke out during the 2016 indoor season with a second-place finish in the 2A 1600. He continued his progression through the outdoor season, which culminated in a victory at the 2A State Championships with a personal best time of 4:23.99.

This fall he will run cross country for the first time in his high school career. Baranoski hopes his success in middle distance events on the track will translate into success on the course.

Easy four miles on the trails with my friend Shawn Gmurek, who is heading to Lynchburg College next year. The heat index in Kingsville was about 110 degrees and we ran in the heat of the day.

Four miles later in the day on my own through the streets at a hair under seven minutes per mile pace.

Woke up and my hip flexor felt tight. I decided to do a good fifteen minutes of stretching to loosen up my hip and legs. Once it got dark I went out and ran seven miles at 6:42 pace up a moderately hilly route. Overall, the run felt pretty smooth but not nearly as fast as my last steady state run. Once I got back I did a half-mile cooldown and six 100-meter strides.

Today I ran with my cousin, Eric Baranoski, who is headed to Stevenson University next year. His schedule called for a ten mile run so I decided to tag along. Before we ran I spent 20 minutes doing static stretches to stretch out my legs and hips. We did a simple strength exercises called the "Lunge Matrix" before we started. We then set out to run a loop around the Loch Raven Dam that very few people know about. Little did we know what lay ahead of us. We found ourselves extremely tired after the second large hill only to find out we had to go up an even taller one to reach the halfway point. These hills were no joke; the first two were comparable to "The Dip" at Hereford. The last one was almost twice as long and very steep. The last four miles of the run were on pavement and we were very tired. We ended up only running nine miles but this run was definitely one of the hilliest runs I have ever done.

Lots of stretching today. Set out on a nice easy run that turned out faster than I expected (7.5 miles at 6:54 pace in the rain). Followed up with six 100-meter strides that felt really good.

Visited York College early in the morning and then headed home. The past few nights I had not gotten much sleep at all and I knew just running easy today would be a challenge. Despite how tired I felt, I decided I would do a tempo run. All my tempo runs this summer (about one per week) have been on a hilly course or even in the streets so I wanted to see how I would fare on a flat track. The plan was to do four miles at threshold pace but I cut it down to three. The splits were 5:47, 5:52, and 5:53. I finished by just running easy for two miles. Very happy with my workout today.

Decided I would recover today so that I could give a good effort tomorrow. Just an easy 5.6 miles during a flash flood.

Did some stretching, then ran 12 miles with my friend and old teammate Tucker Deacon on the NCR Trail. His brother tagged along on his bike to help pace us. The NCR Trail is completely flat so we were hoping for some fast splits. My watch clocked us in at 6:52 per mile up until the ninth mile but I think we may have been going faster. The pace began to slow down around miles nine and ten and we did a cooldown the last two miles. Not the best long run, but certainly not the worst considering I have only done a handful of them this summer, most of which have been less than 12 miles. I am planning to get back into the swing of things and start doing them every week.

Very high mileage week compared to what I am used to doing. This summer I have probably averaged between 40 and 45 miles per week - I plan to get into the 50s and 60s during cross country season. In track I was able to work well off of relatively low-mileage weeks and I'm hoping that the extra mileage will help me this year. Next week I am going to be focused on preparing for the first day of cross country so I am fit and ready to run fast at the first meet.