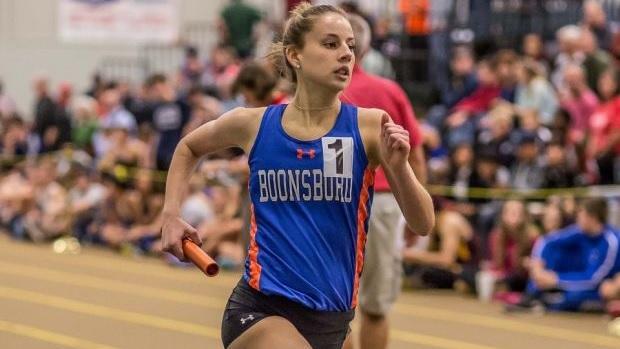 Haley Wright broke into the 2013 outdoor season as a freshman with Boonsboro, recording season bests of 5:16.29 and 11:34.02 in the 1600 and 3200, respectively. The stage was set for her outstanding high school career, and she continued to improve every season from then. By the end of her junior season, she had multiple runner-up state finishes, had clocked a sub-11:00 3200 and had competed at New Balance Outdoor Nationals multiple times - including a third-place finish in the Emerging Elite 3200 in 2015.

In the 2015-16 season, Boonsboro was reclassified to 1A, and Wright took full advantage of the opportunity. After finishing 15th at the Oatlands Invitational in her first race of her senior season, she went undefeated through the state cross country championships, which she won by over a minute and led her team to a state title. She continued her dominance through the indoor and outdoor seasons. At the indoor state championships she won the 1600, 3200 and 800, as well as running a leg on the victorious 4x800, leading Boonsboro to their second team title of the year. It was more of the same at the outdoor state championships, winning all four races and leading the Boonsboro girls to a rare three-season sweep of the team titles. Altogether Wright captured nine titles her senior season, the highest number possible, to go with three team titles.

Before she begins her collegiate career at Alabama, take a look at the top five races of Haley Wright's senior season!