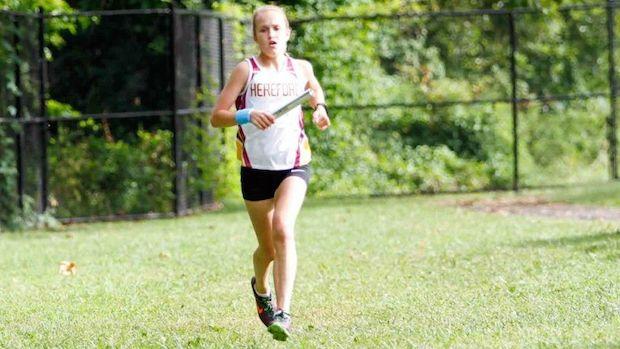 Photos and videos to be uploaded soon from the Baltimore County Relays!

Complete results of the varsity co-ed relay race from the 2016 Baltimore County Relays on Saturday at Towson High School. The Hereford duo of Kelly Weslowski and Dillon Coffey claimed victory as the top tandem in the unique season kickoff for Baltimore County squads as they combined for a total time of 31:54 alternating two legs over a 1.5 mile course.

After running incredible track times as freshmen in 2014 including a 10:52 3200, Hereford's Kelly Wesolowski is running cross country for the very first time. Her performance at the Baltimore County Relays appears to be a positive sign that she is working her way back to her old form after taking off her sophomore year and returning to racing again last indoor season as a junior. If that is the case, she could be find herself among the state's elite again.

Despite Hereford having the winning relay, Dulaney actually won the team competition though with the best combined scoring (14 pts) of their top 3 co-ed tandems led by the pairing of Dorrie Gaeng and Matt Owens combing for a total time of 32:05 for second place, while two other duos of Jessica Meek and Brian McCullough (4th, 32:35) along with Brooke Ruffin and Connor Morton (8th, 33:21) were also among the top 10 finishers.

Towson edged out Hereford a fourth team tiebreaker for runner-up honors with 18 pts. Karen Prem and Jonathan Ellis in third with a total time of 32:14 were the best relay pairing for the host school Towson.

Photos and videos to be uploaded soon from the Baltimore County Relays!