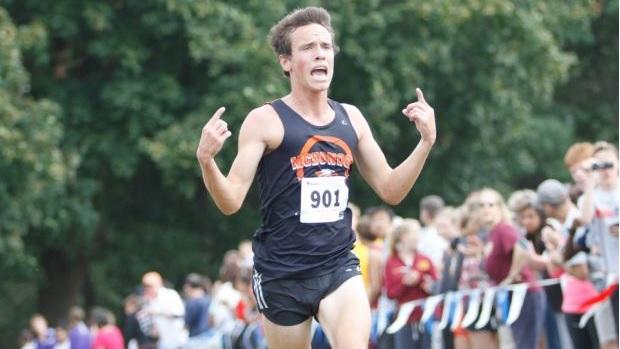 McDonogh junior Dalton Hengst kicked off his 2016 cross country season Saturday with a convincing win at the Barnhart Invitational. His final time of 15:44 is a new personal best and the top time in Maryland so far this season. Read here as he talks about his win and more!

MileSplit MD: This being your first race of the 2016 fall season, was there any extra jitters or nervousness than usual before the race?

Dalton Hengst: Definitely. Not racing since last track season is a long time, so in some ways you forget what it feels like to race. I'm confident in the training I've done, but these first couple races will still be nerve wracking.

MS: Did you have a specific time goal coming into the race? Are you satisfied with your 15:44 performance?

DH: Originally I wasn't even supposed to race at Barnhart, but my coach, my dad and I discussed it and figured it wouldn't do much harm to my season. It would've been nice to run closer to 15:30 but my mindset going into it was just to get a good effort and a win under my legs. The 15:44 is not bad for the first one of the season with a good week of training leading up to it.

MS: This is the third straight year you have run the Barnhart Invitational. What have you learned about the course over the years that helped you Saturday?

DH: It's overall a pretty easy course, and if you get the right guys in the race you'll definitely get fast times. I think the course is pretty easy to pass on, so it's not too important to get out too fast. Just be comfortable through the first mile, and then run the last two. There's not too much strategy to the course.

MS: What do you believe you have improved upon the most as a runner since last season at this time?

DH: Strength, no doubt. Last year at this point the fastest long or regular runs were around seven minute pace. This year I'm able to click off 12 miles at 5:45 pace and feel good doing it. Having your dad on the bike next to you certainly helps (thanks dad). I've also improved in the small, but some of the most important parts of the sport like stretching and my diet. Overall I think I'm a completely new runner. My coaches, family, and myself are all very excited for the season.

MS: Last year you traveled up and down the east coast for elite mile races - will you be traveling out of state for any big invitationals this season?

DH: All of my invitationals are around here. The next two will be In PA, with some great competition. After that I'll travel to New York to race in the big one, Manhattan invite and hope to improve upon last years finish. Then I might travel to Virginia for a race, but that's undecided. After that I'll shoot to do well at my league champs.

MS: Last November you finished 24th at the Footlocker Northeast Regional. Are you aiming for a berth at FLN this season?