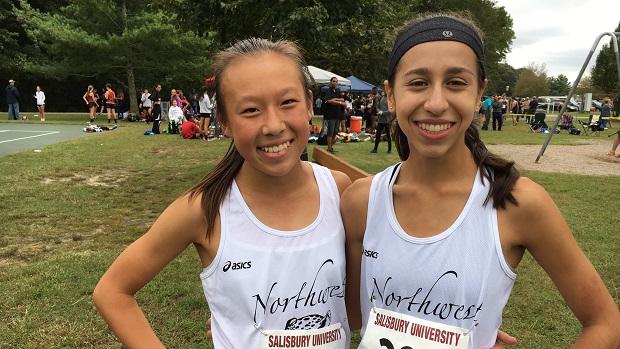 The Tidewater Fall Classic is one of the largest meets on the eastern shore of Maryland year after year, but the meet also attracts one specific team from the middle of the state - the Northwest Jaguars. It took them a bit longer than usual to get to Winter Place Park on Wednesday when their bus ran into some problems on the way there but once they made it, they were ready to run. Their usual strong boys pack was as dominant as ever; with Jose Infante and Rory O'Neill leading the way they placed five runners in the top ten on their way to scoring just 31 points (less than half of the next team).

One of the cool features of the meet is that it draws teams from three different states: Maryland, Delaware and Virginia. This year's winner, Ben Bamforth, came from Delaware's Sussex Technical High School. Bamforth pulled away for the win in 16:33.18. The Kent Island boys also placed three runners in the top 13 en route to a second-place team finish.

On the girls side, the Northwest duo of Sofia Zarate and Helena Lee led the Jaguars to their fourth straight win at the Tidewater Fall Classic. Since becoming regular attendees at the meet in 2013, Northwest has only lost one team race (the boys, in 2013). Milford (DE) High School placed four girls in the top 13, and had their fifth runner been closer they might have been even closer to taking down the Northwest girls. The Kent Island girls also placed two girls in the top five, good enough to lift them to a third-place finish.