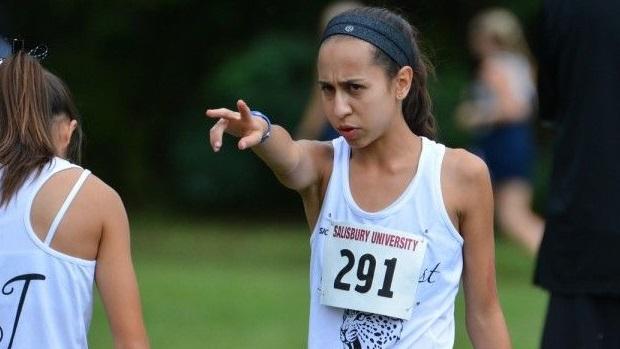 In an epic battle between the top two runners in the state, Walter Johnson's Abigail Green finally broke through against Annapolis' Maria Coffin in the Eastern States division at the Manhattan Invitational. It was a huge victory for Green, and more importantly it sets the stage for what should be a much closer race between the two at this year's state championships (Coffin beat Green by over 30 seconds last year).

Another runner with a huge weekend was Hereford's Kelly Wesolowski. She continued her outstanding senior season by setting the course record at the Gettysburg XC Invitational; her matchup with Hayley Jackson and Julien Webster at this year's state meet is going to be one of the best of the day. Speaking of states, last year's 3A state champion, Great Mills' Annie Imhof, waited quite a while to kick off her senior season, but she scored a convincing win in the rain at the Chaptico Invitational. Her time (19:53.68) was nearly identical to Damascus' Heather Delaplaine (19:52.95) in her own win at the Wolverine Run. The two girls will have to wait until this year's 3A state meet to race each other, where Imhof will try and defend her title.

There was also plenty of mid-week action this past week in Maryland. On Wednesday, C. Milton Wright's Haley Cummins won the UCBAC Chesapeake Division Championship with a time of 19:41.10. Her personal best of 19:11.50 places her third on this season's freshman rankings. Northwest's Sofia Zarate led her freshman teammate Helena Lee to a 1-2 finish at the Tidewater Fall Classic, and also led the Northwest girls to their fourth straight Tidewater victory.

Voting closes at 10 PM on Thursday! Voting is unlimited and feel free to share with your coaches, family, friends, teammates, teachers, and more!