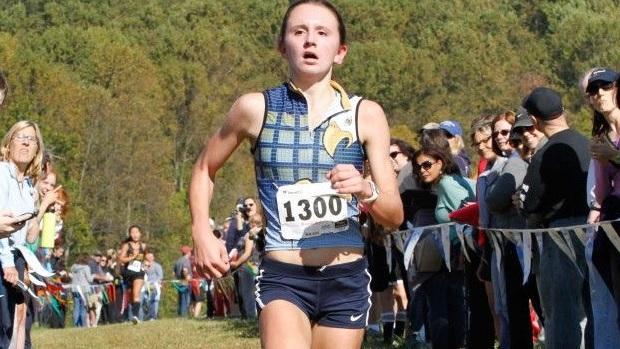 Vote below for Maryland's Week #7 Girls XC Runner of the Week from the October 15th week of meets. This week's batch of nominees includes Paint Branch's Yasmine Kass, Severna Park's Kamryn Eveleth, Catoctin's Julien Webster, Hereford's Kelly Wesolowski and Oakdale's Emily Baba.
Kamryn Eveleth broke out with her first major cross country win this past weekend at the Gunpowder Invitational. She clocked a personal best 19:27.80 at the Gunpowder State Park, beating a field that included last year's winner, Emily Craig. Her performance led the Falcons to a second-place finish behind the Broadneck girls, setting up a showdown with them at the upcoming Anne Arundel County Championships.
Over in Montgomery County, Paint Branch junior Yasmine Kass also pulled out the first big win of her career at the MCPS Consortia Championships. She came within seven seconds of the meet record set last year by her former teammate, Bethlehem Taye, and still has another year to surpass the record. Similarly, Oakdale freshman Emily Baba won her first cross country race on Monday at the Scorpion Crawl Invitational, leading her team to a close second-place finish.
The final two candidates of this week's poll are familiar faces, but every week they seem to find new ways to top their previous performances. Hereford's Kelly Wesolowski clocked a blazing MD #2 5K of 17:41 down in Virginia at the Milestat.com Invitational, and suddenly her potential matchup with Hayley Jackson at the 2A state championships is looking much, much closer than it did after the Barnhart Invitational. Catoctin's Julien Webster set the course record on her home 3,000-meter course at Tuesday's Catoctin Short Course Invitational, then followed it up with a strong third-place showing in the star-studded Frank Keyser Invitational. Her time of 17:44 was less than 15 seconds off the previous meet best of 17:30 (since 2002).
Voting closes at 10 PM on Thursday! Voting is unlimited and feel free to share with your coaches, family, friends, teammates, teachers, and more!