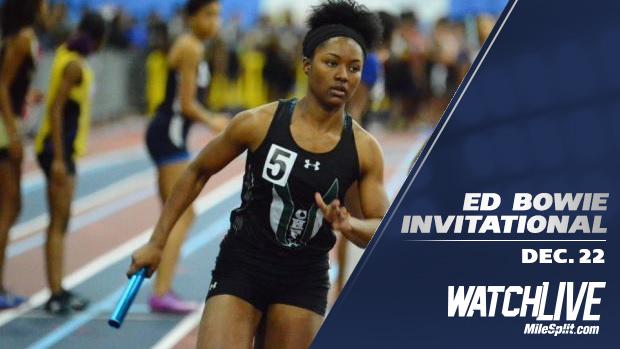 There are sure to be some meet records to fall at Thursday's Ed Bowie Classic! Which ones have the greatest chance of being broken?

The C.H. Flowers girls broke the meet record in the 4x400 last season and they will have a shot to crack that mark again Thursday. They won't be alone, either: four teams are seeded below the 4:06.63 meet record, including DC sprint powerhouse St. John's at 3:56. Both schools have already run 4:04 in the event this season.

The girls 4x200 meet record is one of the older records set at the Ed Bowie Classic, held by the Dunbar (DC) girls from 2012-13. Like the 4x400 there will be more than one school looking to take that mark down on Thursday. The Lackey girls have three outstanding potential legs in Sydney Williams, Dominique Jeffery and Nikiya Mitchell and could be poised to be the first team in the meet's history to crack 1:45 in the 4x200.

Can Antoinette Bradley keep it going on Thursday with a win in the 800?

Watkins Mill's Alyssa Rishell set the meet record last year in the 800, but it might stand for much longer. This year's 800 field is led by Friendly's Antoinette Bradley who kicked off her season with a 2:20.79 upset victor over Nyjari McNeil at the Howard County Winterfest. With six girls seeded at 2:25 or better there could be multiple girls breaking the 800 record on Thursday.