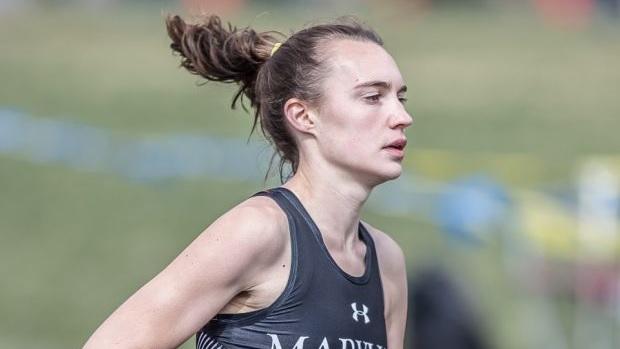 Now two weeks into the outdoor season most of the stars have come out onto the track. The times are beginning to drop as the temperatures have remained favorable heading into April, and there were many notable performances around the state this past week. Vote for the best one below!
Any distance runner will tell you that the 3200/800 double is one of the hardest in the sport, but Maryvale Prep senior Emily Craig had no trouble handling it on Saturday at the Dwight Scott Invitational. First she went head-to-head with 2A indoor state champion Julien Webster in the 3200, in which she ran a personal best of 11:04. Webster's and Craig's performances are currently the MD #1 and 3 marks, respectively. Then Craig came back later in the meet and won the 800 in 2:24.73 - also one of the top ten times in the state so far this season.
Down in Washington, D.C., Churchill's Julia Reicin also had success in a distance race - but not one you may have expected. The experienced steeplechase runner ran a personal best 7:10 in the 2,000 meter race at the Crimson Tide Invitational, good for the fourth-fastest time in the US this spring. Her teammate Gwenyth Asbury also had a fine day, winning both the 1600 and 800.
Alexie Arnold's name doesn't come up during the indoor season, but last year's 2A state runner-up in the discus got off to a strong start in 2017. She went undefeated in both throwing events at the Mountain Ridge and Fort Hill invitationals this past week, rising to third on the state leaderboard in both events. Allegany's Aubree Boyle also put on a display of dominance at the Fort Hill Invitational, winning the 100, 200 and long jump.
Francis Scott Key's Emma Taggart possesses one of the larger ranges of skill sets in the state, doing everything from the jumps to the hurdles to the throws. At the mid-week Fraser Relays she nearly pulled off a rare double victory in the high jump and shot put: she cleared five feet to win the former, and threw a personal best 31'5.75 to finish second in the latter.
Finally at the Cougar Relays the Walter Johnson girls found themselves in a battle with some of the best 4x800 teams in the state. They led four teams under ten minutes, dropping a MD #1 9:47 in the process. The Wildcats also ran a 12:52 distance medley relay, just three seconds off Damascus' current MD #1 time.

Voting Closes At 10 PM On Sunday!