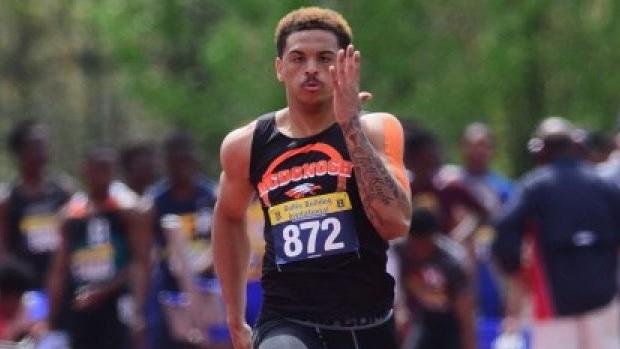 One of the great aspects of the sport of track and field is that progression is easily tracked - just look at the times and performances. Today we take a look at seven athletes who have taken their game to a new level so far this spring. Then vote for your choice below!

Adetomiwa Adebayo: Try saying his name five times fast. The DuVal sophomore made his debut in the 300 hurdles at the Screaming Eagle Invitational, where he won with a (still) MD #1 mark of 38.41. To put that in perspective, his best in the 300 without hurdles over the winter was 37.20. His early-season time puts him in elite company in the event, and he is still only a sophomore.

Bryce Bruce: The only senior on the list, the Bruce recently threw personal bests in the shot put (50'3) and discus (163'5). The Reservoir thrower now sits in the top ten on the state leaderboard in both events, including third in the discus, and leads all 3A throwers in the discus.

Tyrone Bryan: With an indoor state title and New Balance Emerging Elite victory under his belt, Bryan's success has been well-documented. However it seems like the Parkdale junior only keeps getting better, because if it weren't for William Henderson going 14.02 at the Bullis Bulldog Invitational, Bryan's 14.08 victory on the same day at the Largo Lion Invitational would stand as the top mark in the state.

DeJuan Ellis: After spending his first two years at Bishop O'Connell (VA) High School, Ellis has quickly risen to the top of the Maryland outdoor leaderboard. The McDonogh junior finished second in the 100 dash final at the Bullis Bulldog Invitational, nearly stealing a win from section one. His 10.63, while bested by DC's Eric Harrison, has yet to be topped by a Maryland runner this season.

Camden Gilmore: Perhaps the next in a great line of Loyola-Blakefield distance runners, Gilmore has jumped to the top of the statewide sophomore rankings this spring. He leads all c/o 2019 boys in the 1600 and is second only to Calvert's Justin Diehl in the 3200, and ranks among the top eleven overall in both events.

Jonah Lane: Yes, he did go under ten minutes in the 3200 as a sophomore last season, and was a key runner on a very strong Severna Park cross country team this past fall. But it's been the first month of his junior outdoor season that has Jonah Lane turning heads: his 4:20.23 1600 at the Seahawk Invitational still stands at the top 1600 time in Maryland to date.

Aariq Nixon: Nixon went 49.37 in the 400 to win the Central Invitational back in March and has been under 51 seconds in both 400 races since then. Coming into his junior outdoor season Nixon's personal best in the 400 had been 52.89. He is just one of a large number of boys in the 3A classification who will be chasing fast times by the end of the season.