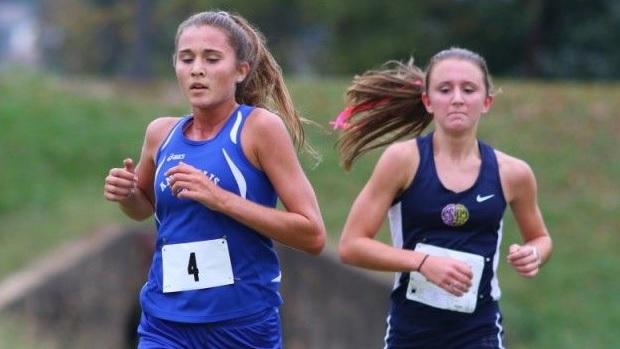 This weekend marked the 40th annual Frank Keyser Invitational at Boonsboro High School, and it featured no shortage of outstanding matchups and performances. The rain and humidity was kept at bay in the mountains of western Maryland and the course saw some of the fastest times in the meets' storied history. Here were the top moments from this year's Frank Keyser Invitational.

Anna Coffin Storms Into The Picture Late For The Win

Last year Annapolis' Maria Coffin finished second in the large school girls' race to Lake Braddock superstar Kate Murphy. This year's race went down to the wire again with a Coffin sister (junior Anna) and Lake Braddock standout (senior Sarah Daniels). Coffin sat behind the lead pack for most of the three-mile race but made up ground where it counts, narrowly edging Daniels at the line after erasing a sizable gap during the final straightaway. The race also marked another chapter in the rivalry between Coffin and Severna Park's Kamryn Eveleth - both juniors, both in 4A East and both from Anne Arundel County. Eveleth finished right behind in third place, and the two girls could continue to go neck-and-neck for the next two years.

Clark, Deamer Not Out Of Question In Quest For 4A Title

This year's 4A state meet is shaping up to be a free-for-all battle, as no clear favorite has emerged from the pack. Richard Montgomery's Mark Unger and B-CC's Adam Nakasaka have gone back-and-forth all year on the Maryland leaderboard, but on Saturday it was another pair of standouts making their case. Severna Park's Garrison Clark finished second in the large school boys race with a three mile time of 15:03, and Howard's Nick Deamer (who has finished in the top ten at the state meet in each of the past three seasons) was just three seconds behind. Unless someone can make a drastic improvement between now and the state meet, it doesn't seem like there will be a clear favorite heading into the day on November 11th.

The girls' small school race saw a tight team battle for second place between 2A rivals Century and River Hill. Jasmine Tiamfook (first) and Faith Meininger (seventh) gave River Hill some key low scores, but ultimately it was the Knights and their 45-second 1-5 gap pulling ahead by four points. It will be a race worth remembering since the two teams won't meet again until the state meet in November, where they will also have to contend with the multiple-time defending champions from Hereford.

Another Huge 2A Battle In The Boys' Race

Something is going to have to give in 2017: the Liberty boys have won two straight 2A state championships, and the 2A newcomers from River Hill have won three straight in the 3A classification. If Saturday's matchup in the small school boys race was any indication, every single point is going to count. The Liberty boys pulled out a narrow three-point victory, in large part by putting their third runner before the Hawks' second. Lurking in the shadows were the Century boys - last year's 2A state runners-up - in third place. The two will meet twice more before they both take on a slew of solid teams, including River Hill and Calvert, at the state meet next month.