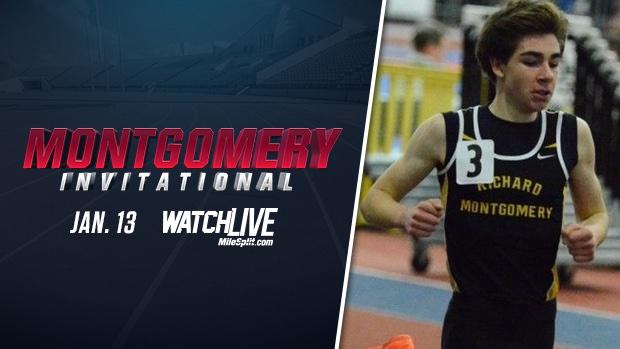 Some of the top boys individuals to watch as part of our LIVE stream of Saturday's Montgomery Invitational at the PG County Sportsplex.

Napoleon Hernandez (Tatnall DE) - Boys 500m Dash (1:06.91): Only a sophomore, Hernandez showed himself ready to race with big boys plenty of times last year as a freshmen including winning a Delaware state title outdoors in the 800 with a 1:55 personal best performance. Last weekend, Hernandez won the Ocean Breeze Freedom Games 600 with a 1:23.54 performance. He will get a rare opportunity to race a 500 this weekend in Maryland (Delaware runs 400 instead of 500 indoors).

Garrett Suhr (Richard Montgomery) - Boys 800m Run (1:56.60): Another superb sophomore star who should rise in national recognition in the coming years, Garrett Suhr owns the fastest times in the nation for class of 2020 in both the mile (4:22.95) and 800 (1:56.60) from his double last weekend at Penn State. He will be challenged in the 800 by a familiar Montgomery County foe in Chase Osborne of Northwest with a 1:56 personal best as well. Suhr was the Maryland 4A state runner-up indoors in the 1600 last year as a freshmen and has run a 9:38 PR in the 3200 this winter.

Brandon Tunson (CH Flowers) - Boys 55m Hurdles (7.57): Tunson has had a break out season to emerge as one of Maryland's top hurdlers. Tunson has scored major victories this season at PG in Howard County Winter Festival and FIT Invite, while was a close runner-up at the Ed Bowie Classic and last weekend's Southern Maryland Classic. His season best of 7.57 currently ranks the CH Flowers senior Tunson as #16 in the country.

DeJuan Ellis (McDonogh School) - Boys 55m Dash (6.51): There is more talent at McDonogh than just sub 4:10 miler Dalton Hengst. Ellis has some speedy best times in the sprints and has the fastest F.A.T. time along all entrants at Montgomery Invite in the 55 meter dash at 6.51 from his victory at the IAAM/MIAA Championships on year ago. Ellis has also rolled to a 100 meter dash time of 10.63. He's also leaped over 24 feet in the long jump.

Aaron Hackett (Largo) - Boys 300m Dash (34.83):  Hackett broke 35 seconds at PG last weekend while finishing third in a very competitive race led by Eric Allen Jr. of Bullis School. He has a great opportunity to win this weekend while improving upon his sub 35 clocking at the Montgomery Invite. Hackett was a Maryland state runner-up last year indoors in the 300 and outdoors in the 300 meter hurdles.