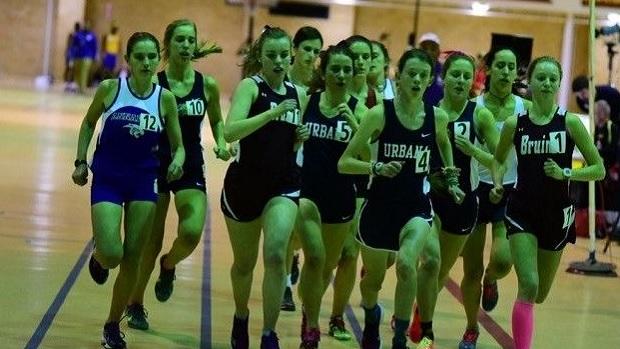 Due to cancellations, Tuesday was the first day with double-barreled regional action in the state of Maryland: the 4A Central regionals at the Armory and the 3A East regionals at the Sportsplex. Here were some of the top stories from the two meets.

The Centennial girls headed into Tuesday's 3A East regionals with a season best 4x800 time of 10:11. However they took down the 3A leaders from Northern in a tight race that wasn't decided until the final leg. The two teams are the only squads in the 3A classification that have gone under 10 minutes so far this year, though we'll wait to see what the other teams (especially Franklin and Tuscarora) do in their respective regions before calling the Eagles the favorite in the event. Centennial has not finished in the top five at the indoor state meet since 1998, when they finished third.

The Mount Hebron girls finished second in team scores on Tuesday, 19 points behind Atholton. However, the Vikings may be poised to succeed at the state meet due to their top performers. Even after star sprinter Sydney Robinson transferred back to River Hill this season, last year's group of underclassmen have become one of the top sprinting groups in the state. They went 1-2 in the 300, 2-3 in the 500, 2-3 in the 55 dash and won both the 4x200 and 4x400 relays. That kind of star power can rack up a lot of points at the state meet.

Running well in the 1600, 3200 and 800 is hard at an indoor meet. Not many are able to pull off such a daunting task. Reservoir senior Kai Muniz was up to the challenge on Tuesday, however. He sandwiched wins in the 1600 and 800 around a third-place effort in the 3200, qualifying for the state meet in all three and beating some big names in the process. He will enter the state meet as the favorite in the 1600, owning the third-best time in the state and coming off a win against Northern's Greg Oldham, who ranks fourth. How he finished in the 3200 and 800 will depend on his own goals, but chances are he will walk away from next week's state meet with at least one title. His performance was also a big reason why the Gators won the team title at the regional meet and will be shooting for a state team title, as well.

Garrison Clark Cares Not For The Armory Effect

Somebody forgot to tell Severna Park junior Garrison Clark that you aren't supposed to run fast at the Baltimore Armory. He won the 3200 by over 20 seconds, and his 9:38.04 time is only surpassed by former fellow Falcon Ryan Forsyth on MileSplit's armory venue records. With many of his 4A 3200 competitors also entered in the mile (Adam Nakasaka, Obsaa Feda, etc.), Clark's focus on the 3200 may serve him well at the state meet next week.

The Broadneck Bruins put together some performances that may have seemed surprising if you hadn't followed the team closely all season. On the girls' side, senior Olivia Janke - who finished ninth at this year's 4A state cross country championship - ran away from the field in the 3200, her 11:18.65 only surpassed by some of Maryland's biggest names (Coffin, Taye, Green, Wesolowski) in recent years at the Armory. On the boys' side, senior thrower Elian Ahmar won the shot put with a monster throw of 54'8.50. Ahmar holds the top spot on the state leaderboard and has since January 23rd when he threw 55'6.50 at the Anne Arundel County Championships. The real story? Ahmar only cleared 45 feet once last spring, his first season in the sport.