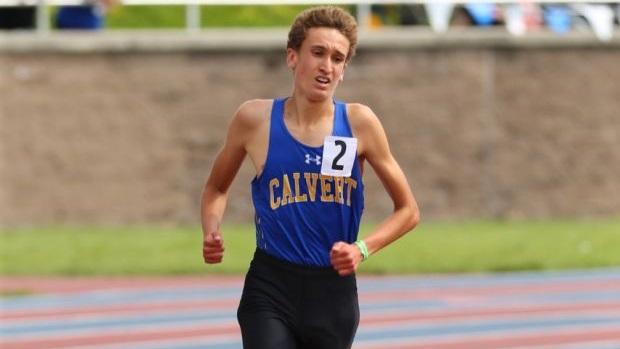 As a sophomore, Justin Diehl ran away with his first state title in the 2A boys 3200. The state's fastest returner in the 3200 may have an even bigger challenge waiting for him in May if he goes head-to-head with Poolesville's Ryan Lockett, as they did back in November. (Photo by John Roemer)

It was a banner year for Maryland in the 3K/3200. First, Dalton Hengst (transferred this winter) broke nine minutes in the 3200 at the prestigious Arcadia Invitational. Then, Ryan Lockett and Rohann Asfaw went 2-3 in the 3000 at the Penn Relays with times that converted to about 9:01 and 9:02 in a 3200. Out of that group, Lockett is the only one back in 2018, but so are Calvert's Justin Diehl, B-CC's Adam Nakasaka and Southern Garrett's Declan Horner (the latter two of which were state champions in the event this winter).

Others to watch: Loyola junior Camden Gilmore finished the winter atop the state leaderboard when allowing for converted two mile times; he and Severna Park's Garrison Clark both finished in the top ten in the Emerging Elite section at New Balance Indoor Nationals; Northwood juniors Eldad Mulugeta and Obsaa Feda broke out this past indoor season, going 2-3 at the 4A state championship and both finishing among the top seven runners in the state in the event.