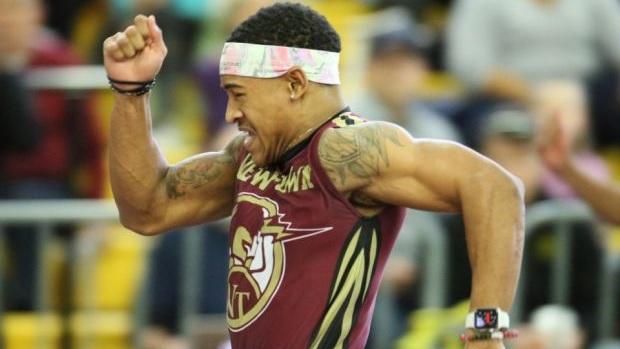 New Town's Jordan Cofield won the 2A 55 meter dash title this past winter. How did he fare in his first invitational effort of the 2018 outdoor season? (Photo by John Roemer)

Who was the top boys performer of the first week of April? The calendar finally turned to the fourth month of the year, but it didn't change anything about the weather - many meets over the past weekend saw snow flurries instead of sunshine. However, some of Maryland's best stepped up and recorded some noteworthy performances. Vote for your favorite below - the poll closes on Sunday at midnight!

Peter Antonetti, Gaithersburg: Antonetti won the Devil Takes The Hindmost at Saturday's Quince Orchard Cougar Relays. The race involves running laps and eliminating runners off the back of the field until only one remains: the ultimate combination of physical and mental toughness. Antonetti took down the two-time defending champion Chris Thoms.

Jordan Cofield, New Town: Cofield was one of the many faces in a star-studded sprint field at Friday's Largo Lions Invitational. The runners took full advantage of the (relatively) warm weather and dropped some of the fastest times the state has seen so far this season. Cofield set new personal bests in the 100 (10.76, MD #3) and 200 (21.96, MD #4) and now ranks among the top four in the state in each event. He was also a member of the 4x200 relay that broke the meet record and became the first team to break 1:30 this season.

Naeem Green, Good Counsel: Green did not set any new personal bests in the frigid conditions at Saturday's Crimson Tide Invitational, but he did walk away with wins in both the 110 and 300 meter hurdles. Compared to all other private school athletes in Maryland Green boasts the fastest 300 hurdles season best and the second-fastest 110 hurdles season best.

Jonah Lane, Severna Park: The Severna Park senior blew away a talented 800 field at Friday's District V Challenge, en route to a MD #1 and new personal best of 1:57.99. Prior to competition on Saturday Lane was the only runner in Maryland to have run under two minutes this spring. Lane also ran a leg on Severna Park's victorious 4x800 relay that also ran a MD #1 time.

Kieran McDermott, Bel Air: After capturing his third state title during the fall, McDermott left that track scene during the winter, but he has come back in stellar shape for the start of his final season in a Bel Air uniform. After running 9:37 in a league meet last week he shot straight to the top of the 1600 leaderboard with a 4:14.30 effort at the WCU Golden Ram Invitational. McDermott was entered to race Poolesville's Ryan Lockett at the Pikesville Track Classic that was postponed until this coming Friday.

Evan Wachter, Hancock: Wachter surged up to 12th on the state shot put leaderboard after his 45'9 personal best win at Friday's Charas Heurich Invitational. Wachter is now two-for-two in shot put competitions on the season and, after entering the indoor season with a personal best of 41'11.50, has now thrown over 43 feet in each of his last six competitions.