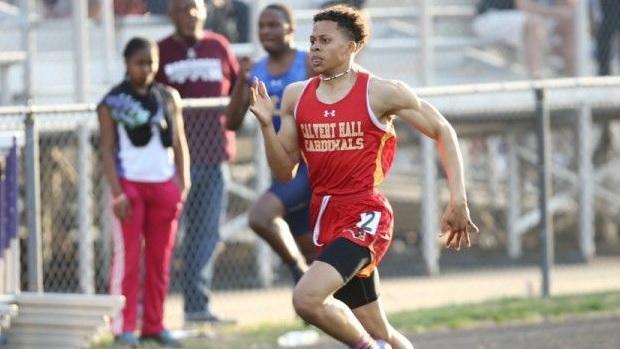 Calvert Hall's Amondo Lemmon shaved more than a little bit off of his 400-meter personal best this past Friday with his performance at the Pikesville Track Classic. (Photo by John Roemer)

Lola Alli (Reservoir, Senior): Won the discus at the Chuck Zonis Invitational. Threw 123 feet, a personal best and season best by 15 feet, to remain undefeated in the discus so far this spring. Currently leads all 3A girls in the event.

K.C. Ashioga (Gaithersburg, Sophomore): Won the triple jump at the Jim Vollmer Invitational. 35'1 leap was a personal best by two feet and the second-best by a sophomore this season (behind only Bishop McNamara's Mya Bradley). Also set a new personal best in the long jump, in which she finished eighth.

Ryan Chinn (Smithsburg, Junior): Second in the long jump at the Chuck Zonis Invitational. Added over two feet (18'9 to 20'11) to his personal best, and now ranks third in the 1A classification in the event.

Gaoussou Coulibaly (South Hagerstown, Junior): Seventh in the 400 at the Jim Vollmer Invitational. Shaved well over three seconds off his personal best in the event (55.58 to 52.13). Currently owns the second-fastest quarter-mile performance of the spring in Washington County.

Duane Kizer (Westlake, Junior): 11th in the 300 hurdles at the Bullis Bulldog Invitational. Had set a 41.64 personal best in the event earlier in the week at a SMAC League meet, then broke it by running 40.96 on Saturday afternoon. Current time leads all SMAC athletes by nearly two seconds.

Dianna Koger (Bowie, Freshman): Fourth in the 200 and sixth in the 100 at the Don Boyer Invitational. Ran the sixth- and seventh-fastest freshman times in the state, respectively, in her first outdoor competition of the season.

Amondo Lemmon (Calvert Hall, Junior): Won the 400 at the Pikesville Track Classic. 49.63 spring debut in the event was a personal best effort by nearly two seconds, although had shown plenty of promise coming off a 36.23 300 this past winter. Lemmon is currently sitting at a MD #4 ranking in the event.

Haran Nadaratah (Oakdale, Junior): Second in the 400 and 300 hurdles at the Don Boyer Invitational. Set new personal bests in both events, plus the 110 hurdles at Saturday's meet. 50.48 400 meter effort is the second-fastest by a 2A runner so far this spring, as is his 40.72 300 meter hurdle time.

Claire Neff (Maryvale Prep, Sophomore): Won the shot put and the high jump at the Pikesville Track Classic. 36'10 shot put and 5'0 high jump are second- and third-best on this spring's sophomore leaderboard, respectively.

Dorcas Nyakiti (Frederick, Senior): Finished 23rd in the 300 hurdles at the Bullis Bulldog Invitational. Breakout was buried in a deep field, but she cut over three seconds off her personal best in the event. Now currently ranks third in both Frederick County and 3A classification (top three names are same for both).

Moussa Sylla (Blake, Senior): Finished third in the triple jump at the Bullis Bulldog Invitational. 45'6.25 performance was a personal best by nearly two feet and an outdoor best by nearly three. Jumped (pun intended) all the way up to second on the state leaderboard behind only fellow 3A competitor Nathaniel Moore from South Hagerstown.

Shakur Trimble (Fort Hill, Junior): Finished second in the discus at the Fort Hill Invitational. His 143'9 effort actually wasn't even his best of the week - last Tuesday he threw 150'5 in a league meet. He has since upped that mark with a 156'2 throw this week at the Cumberland City Championships, second-best in Maryland this season.