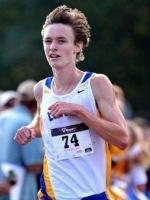 Can Maria Coffin Break 17 Minutes For 5K At The Seahawk...
Previewing the featured 12 and a half lap event which will kick off Saturday's Seahawk Invitational at the South River High School. ...

Every Point Counted! WATCH Mount St. Joseph & Loyola-Bl...
Watch the varsity boys race from the 2015 Scorpion Crawl which saw the IAAM conference's top two squads in Mount St. Joseph's and Loyola-Blakefield battle it out down to a 1 point difference between t...

Hengst 15:50, Loyola-Blakefield Boys 8th In A Sloppy Pa...
The Loyola-Blakefield and McDonogh School boys cross country teams both made the Friday trip up to the Paul Short Run in Pennsylvania with Dalton Hengst as the top Maryland performer in 7th place at 1...