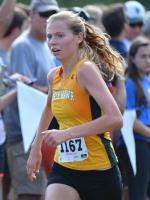 Maryland Girls Top 25 XC Preseason Individual Rankings ...
Find out who are the top 25 girls cross country individuals to watch out for heading into the 2016 season in Maryland with our pre-season rankings list being released!...

LIVE Updates From Crossfire Invite! Lang & Tilson Expec...
MileSplit will be on-site with coverage (photos/videos/interviews) for Tuesday's Crossfire Invitational at Liberty High School in Sykesville, Maryland. A total of 18 teams will be competing in this fa...

Junior Girls Head Of The Class Rankings: Emily Craig Do...
Check out the top 500 junior girls 5K cross country times in the state of Maryland as of September 16th....

Top 500 Girls 5K Times In Maryland - Week 1...
Check out the top 500 girls 5K times in Maryland as of September 7th. The Seahawk Invitational was a fast one producing many of the state's top times in the state with a handful of junior girls breaki...