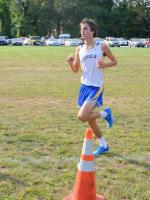 First Results Of 2016 XC In Maryland: Kieran McDermott ...
The Mustang Invitational at C. Milton Wright High School on Friday afternoon officially kicked off the 2016 cross country season in the state of Maryland with some impressive results. In particular fr...

Seahawk Invitational Preview: #1 vs. #2 Already?! Loyol...
The fourth annual Seahawk Invitational will be held on Saturday at South River High School in Edgewater, Maryland. 30 schools and over 1,200 athletes are entered in the meet as one of the top opening ...