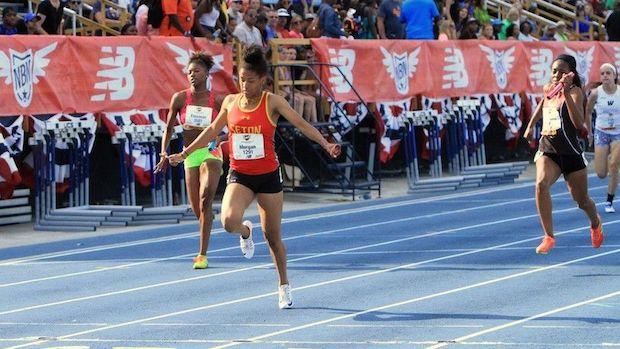 Follow along for updates and highlights of Maryland athletes and relays from day three of the New Balance Nationals Outdoor in Greensboro, North Carolina. (Photo by Mary Ann Magnant)

Championship Girls 4xMile Relay - The Northern-Calvert girls placed 20th overall in the 4xmile with a total time of 21:44.57, which averages out to a 5:26 split per leg.
Emerging Elite Girls DMR - The Paint Branch girls kicked off Sunday morning winning the emerging elite division of the DMR with a near sub 12 minute performance with a final time of 12:01.32. An impressive performance considering the time would have placed them 7th in the championship division later in the evening.
Championship Girls 800 SMR - The Elizabeth Seton girls just missed out on All-American honors in the 800 SMR clocking a time of 1:46.44 after finishing second in their heat to place 8th overall. Clarksburg won a slower heat in 1:47.91 to place 14th overall.
Championship Boys 800 SMR - The DuVal boys were the top finishing Maryland squad in the boys 800 SMR with a time of 1:33.27 for 12th place followed by Milford Mill Academy in 14th place at 1:33.35. Suitland, emerging elite champions earlier in the meet in the 1600 SMR, placed 17th overall with a time of 1:33.50.
Emerging Elite Girls 800m Run - Franklin sophomore Nyjari McNeil placed 24th overall among 3 heats in the emerging elite 800 with a time of 2:15.07 from this year's 3A indoor and outdoor state champion in the 800.
Emerging Elite Boys 800m Run - 4A state champion Thierry Siewe-Yang of Montgomery Blair won his section in a time of 1:54.09, but it wasn't enough to earn himself a medal in the event as he placed 9th overall with that effort. Meanwhile, 3A state champion Gary Ross of Oxon Hill finished 11th overall in the event with a time of 1:54.54.
Emerging Elite Girls 400m Hurdles - Maryland girls grabbed 3 of the top 5 places in the emerging elite 400 meter hurdles led by C.H. Flowers senior Oluchi Ike as the event runner-up in 1:02.30, while 4A state champ Tylar Colbert of Digital Harbor won her heat in a time of 1:02.45 to place third overall. Baltimore Poly junior Nadia Hackett also won her heat in 1:02.81 to place fifth overall.
Emerging Elite Boys 400m Hurdles - Gov. Thomas Johnson junior Sean Burruss just missed getting on the podium in the emerging elite boys 400 meter hurdles clocking a time of 54.47. Digital Harbor's Marquise Hill was the next best performer from Maryland with a time of 55.17 to place 12th overall.

Championship Boys 200m Dash Prelims - Several were close to making the championship boys 200 meter dash finals, but ultimately only one in Good Counsel's Darnell Pratt  by winning his prelim heat in 21.33 automatically qualified for the 8 lane final. Not far off from qualifying were Bullis School's Eric Allen at 21.34 for 10th fastest overall and Oxon Hill's Jabari Michael at 21.41 for 12th fastest overall.

Emerging Elite Girls 4x400m Relay - The Lackey girls continued their strong weekend stepping it up with their relay performances including a season best performance of 3:52.68 to place third overall in the emerging elite 4x400. The time ranks them MD #3 for the season. The Mount de Sales Academy girls also ran very well to dip under 4 minutes for the first time this spring in 3:56.62, while the 4A state champs from CH Flowers just missed out on sub 4 in 23rd place at 4:00.13 with their "B" squad.

Championship Girls 4x400m Relay - The Bullis girls improved upon their state leading time from the Penn Relays and worked their way closer to the all-time greats of the past Eleanor Roosevelt squads almost decade ago finishing fifth at New Balance Nationals for All-American honors with a time of 3:44.54. Finishing just outside of a top 6 All-American 4x400 finish were the 4A state champions from CH Flowers, who chopped off 3 seconds off their season best time in a 3:49.50 performance. Four more squads went under 4 minutes including Bowie (17th, 3:55.26), Paint Branch (23rd, 3:56.96), Tuscarora (27th, 3:57.72), and Laurel (28th, 3:58.42).

Championship Boys 200m Dash Finals - Incredible race by Good Counsel junior Darnell Pratt to run a state leading time of 20.94 in the 200 meter dash with a wind legal reading. Pratt is the first and only athlete from Maryland this season to go under 21 seconds and earned All-American honors with his third place finish in the championship boys 200 finals.

Emerging Elite Boys Long Jump - Known more as a hurdler, Michale Reyes of Fairmont Heights was able to grab the sixth medal spot in the emerging elite long jump with a mark of 21'6.75".