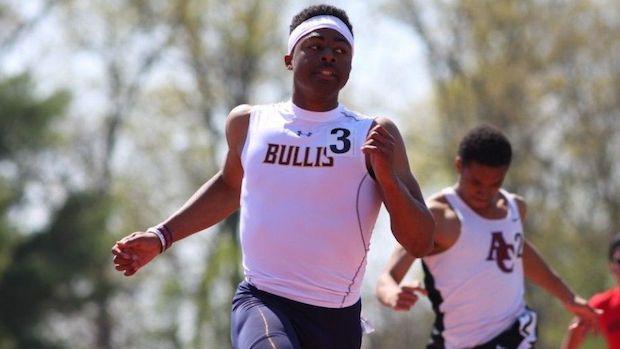 Bullis School sophomore Eric Allen Jr. won the 100 meter dash for the boys 15-16 age group finals with a personal best and state leading time of 10.55. More impressive, Allen did it into a -1.9 headwind! He was not done with just the 100 as he clocked a new personal best 21.04 clocking to move himself up to a MD #2 ranking the event despite even running into a stronger headwind at -2.3! (Photo by Craig Amoss)

Complete results posted below along with elite performances by Maryland high school athletes at the USATF Region 3 Championships held this past weekend at the Prince George's County Sportsplex in Landover, Maryland.

The meet had some incredibly fast and deep races in the girls sprints with a total of 4 Maryland girls running under 12 seconds in the 100 including Elizabeth Seton's Lauren Morgan at MD #4 11.72 with the top time followed by Riverdale Baptist's Stephanie Davis at 11.73, Quince Orchard's Ashley Seymour at 11.92, and Northwest's Taylor Wright at 11.98.

Davis got revenge on the WCAC champion Morgan in the 200 though with a sensational 23.68 clocking to improve upon her state leading season best time in the event.

Quick times in the girls 100 hurdles by Alexis Postell of Bullis School at 14.33 and Cierra Pyles of Clarksburg at 14.41 with the younger Pyles now looking to make a bigger name for herself with her older sister Alexus now graduated and heading off to Ohio State soon. Postell has had a strong last two months including a win in the 100 meter hurdles against 2A state champ Sydney Williams of Lackey at the DMV Meet of the Elite last month. Postell also won the long jump with a leap of 18'3.25, which saw 4 more girls from Maryland leap over 18 feet between the 15-16 and 17-18 age groups.

Cierra Pyles should her athleticism in not only the hurdles, but jumps as well recording marks of 18'0.50" in the long jump and 38'6" in the triple jump. Huntingtown's Harleigh White, an AAU All-American last summer and New Balance Nationals All-American this year, finished 4th in the triple jump at the USATF regional meet with a leap of 38'9.50".

High Point's Ken Nelson continues his summer surge after earning a medal in the emerging elite 200 at New Balance Nationals with a 21.80 PR clocking, Nelson finished runner-up at the USATF Region 3 meet with a new personal best in the 400 as well at 48.87.

Two of the state's elite triple jumpers competed head to head this weekend in Seneca Valley's Donavan Beckett-Simms (MD #1 ranked) and Centennial's Elijah White (MD #3 ranked) with Beckett-Simms having the better day with his fifth leap of 45'7" over White in sixth place at 45'4.25". Jumpers from North Carolina and Virginia though outperformed them both.

Urbana's Delia Sipe had a great weekend in throws recording marks of 39'5" in the shot put and 137'8" in the discus to win both competitions at the USATF 3 Regional Championships from the 3A state champion thrower.

Maryvale Prep's Cameron Hinton ran under 57 seconds not once, but twice in the 400 for her prelim and finals including a 56.28 clocking to take runner-up honors in the event.

Maryland athletes that qualified and opt to compete for the USATF National Junior Olympic Track & Field Championships will be traveling out to Sacramento, California with all events being contested between July 25th and 31st.