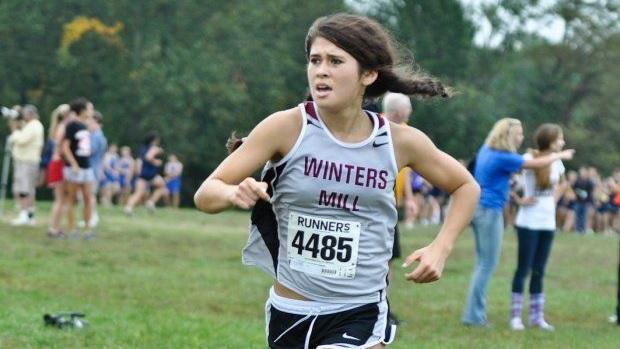 Vote for the best girls state cross country moment in the past five seasons! The state meet course has changed twice over the past five years but there have still been some great performances and storylines in that timespan. Let's revisit some of the most memorable:
2011 - Oneda Demolishes Course Record
The cross country course at Hereford High School is known as one of the most unforgiving in the entire mid-Atlantic. Now that the course has changed, sub-19 minute performances are a bit more common than they used to be; prior to 2013 they were virtually unheard of. Except if you're Hannah Oneda. The Winters Mill senior completed the race in 18:28, defeating the previous course record by over 20 seconds. While multiple girls have since beaten that mark on the new version of "Bull Run", Oneda's run will go down as one of the most dominant performances in the course's storied history.
2013 - Walter Johnson Girls Upset BCC, Begin Dynasty
After the BCC girls won the 2013 Montgomery County Championships it seemed that they were well on their way to their third straight 4A state title as well. However, the Walter Johnson girls - who finished 13th at the state meet a season prior - had other plans. Led by junior transfer Kiernan Keller they upset BCC at the 4A West Regionals, then repeated the act on the biggest stage of all at the 4A State Championships. Since then they have won three straight state titles and will be aiming for their fourth on Saturday.
2011 - Century Edges South Carroll By Slimmest Of Margins
Sometimes teams dominate the state championships. Other times, however, every single place can make a difference. The 2011 2A girls race was an example of the second. The Liberty girls had won the Carroll County Championships, while South Carroll picked up the 2A West Regional title. So which Carroll County team won the state championships? That's right - Century. Four teams (Century, South Carroll, Walkersville and Winters Mill) finished separated by nine points, with Liberty not far behind.
2014 - Mulhern Wins Third Title In Four Tries
In 2011 Urbana freshman Emily Mulhern won the 3A state title. In 2012, she did it again. However in 2013 she dropped to sixth at the state championships. Winning just one state title is hard enough, but three? In the past five season nobody has won three state titles - except for Mulhern. In 2014, despite finishing fourth at the county championships and not running the 3A West Regionals, she returned to the top, accomplishing the rare feat. In her three races at Hereford during her high school career, she went 3-0 with three state titles. Not bad.
2014 - McUmber Finishes On Top
By the end of her senior season, BCC's Nora McUmber had become one of the most accomplished runners in her class. She had won three straight county championships, won two team state titles and even won the NXN Southeast Regional in 2013 to earn a trip to Nike Cross Nationals. There was just one thing missing - a state title. McUmber had finished in the top ten at the state meet all three seasons prior but had never won, and after finishing just seventh at a wild 4A West Regionals in 2014 it looked like she might not capture that elusive title. However, McUmber pulled through, winning her last race in a BCC cross country uniform and solidifying her status as one of the top runners of the 2010s.
Voting closes on Friday at 11:59 PM!
Tweets by MileSplitMD