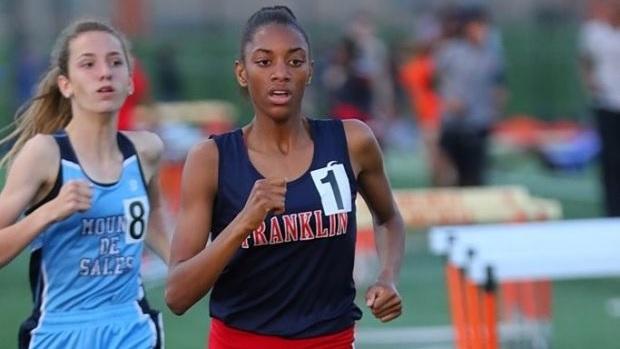 The Gator Invitational at Reservoir High School always draws a large crowd, usually being the only big invitational in Maryland during Penn Relays week. This year will be no exception, and MileSplit MD will be live streaming all of the action throughout the day! Here's what to look for in every running event on the girls' side.

100: Frederick's Jaida Smith will be making her 100-meter dash debut for the season after running a MD #3 11.67 last season. The five-time state champion will go head-to-head with three-time IAAM champion Jada Seaman, who enters with the second-fastest personal best in the field (12.25).

200: The aforementioned Seaman ran 24.91 last weekend at the Scorpion Classic, but she will have plenty of competition including the Franklin duo of Cameron Hinton and Jenae Dorsey. Seaman and Hinton are plenty familiar with each other, having faced off at in the IAAM many times while Hinton ran at Maryvale Prep.

400: Maryvale Prep's Courtney Kenny is the top seed and coming off a 59.51 season best in the rain at the Knights Invite. However, with eleven girls seeded between 58.00 and 1:00.00, the competition will be fierce, and the winner could very well come from a heat other than the fastest seeded

800: Franklin's Nyjari McNeil is coming off an outdoor personal best of 2:12.84 in her win at the Scorpion Classic, and she has only lost one 800 race all year. In fact she has only lost three races in total all year. Favorable conditions could mean that she will be chasing the first sub-2:10 since Tasha Stanley ran 2:09 in 2007.

1600: While McNeil will be chasing the 2:10 mark, Mount de Sales sophomore will also have her sights set on a mark of her own: sub-5:00. After running 5:00.32 indoors, the fastest sophomore miler in the state could be the fourth Maryland girl to crack five minutes this year. The field is also very deep, featuring seven more runners seeded between 5:10 and 5:20.

3200: Northern's Molly Barrick will be aiming for the first sub-11:00 3200 in Gator Invitational meet history after running a 10:59.25 personal best last weekend at the Viking Invitational. Look for some fast times in the event as it kicks off the day at 9:45 a.m.

100 Hurdles: Dunbar's Thea Shaw enters with the lone seed time under 15 seconds, and the 2-5 seeds are about as close as you can get. That group includes the 4A indoor state runner-up Nafisat Adeyemi and the outstanding Old Mill duo, Diamond Moore and Breanna Mealer.

4x100: The Oakland Mills girls went under 50 seconds in the 4x100 on the home track at the Scorpion Classic, bumping them up to eighth on the state leaderboard. The Frederick girls, meanwhile, rank fourth with their 48.54 from the Bullis Bullog Invitational, but may not be running an A team as they enter seeded at 50 seconds. In any case, the current meet record of 49.12 could be threatened, especially with the conditions looking excellent for sprinting on Saturday.

4x200: After running 1:44.59 last spring (one of the fastest by a Howard County team) the Atholton girls will be debuting their 'A' team on Saturday. As mentioned above, Saturday's expected warm temperatures could lead to some big season bests in the sprint events.

4x400: Perhaps the most unpredictable of events, it's still surprising that no team has ever gone under four minutes in the meet's history (the Milford Mill girls ran 4:00.01 in 2013). Could 2017 be the first? Only two teams (Dunbar and Northern) are seeded below 4:10, but there are plenty of teams (Franklin, Mount Hebron, Severna Park, etc.) that could if they decide to run a fast team.

4x800: The girls 4x800 will definitely be an event to watch, because many of the top teams are capable of going well under 9:50. Ultimately it might come down to which team between Maryvale Prep, Walter Johnson, Northern and South Carroll runs their true 'A' team; if more than one of them do, it could end up reshaping the current Maryland leaderboard.