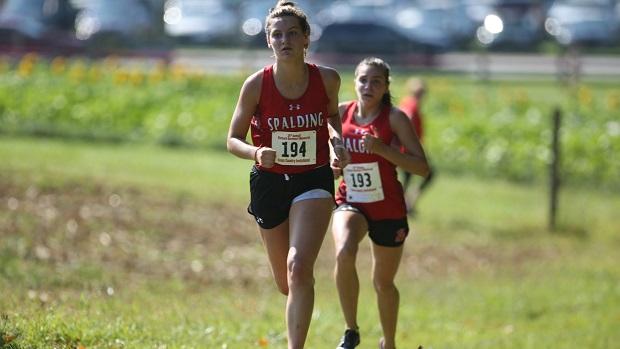 For the teams who attended Saturday's Barnhart Invitational it was much like driving a new car, or maybe playing with a new family pet. It was difficult to know what to expect from the new picturesque course at the Baltimore Agricultural Center, but one thing was for sure: the meet was not going to lack in competition. These were the top moments from a busy day at the 2017 Barnhart Invitational.

Mount de Sales junior Samantha Facius led most of the way during the girls varsity race, courageously attacking the new course in the heat by herself for over two miles. However, IAAM rivals Lacey Eden and Allysa Combs - both sophomores from Archbishop Spalding - stayed close enough to Facius to make a move late in the race. That opportunity came in the final 400 meters when Facius unfortunately succumbed to the heat, leaving Eden and Combs to race to the finish. Expect another fantastic race when the two teams meet again for the IAAM Championships.

There was little doubt that Hengst was the favorite heading into Saturday's race, but Hengst left absolutely no doubt in peoples' minds as to who the top runner in the state is. Hengst cruised alone behind the pace cart for most of the race, but even he seemed a little surprised to see the clock read 15:10 as he crossed the finish line. Not only is it the top time in MileSplit's database in Barnhart Invitational history, it sets a lofty course record that could stand for many, many years at the Baltimore Agricultural Center.

The Severna Park boys have been one of the top programs in the state of Maryland over the past decade, so it wasn't a huge surprise to see them take home the team title in the boys varsity race (even against last year's 4A state champions from Dulaney). However it wasn't just the guys who came ready to win on Saturday: the girls also took home the team title, and not just in the varsity race. The Falcons put five in the top six in the JV girls' division, something the boys team has grown accustomed to doing recently. With the Walter Johnson girls not at full strength so far this season the Severna Park girls are one of the many 4A teams looking to take advantage and emerge as threats to the Wildcats' reign.

Welcome Back To Maryland, Noah Clifford

Noah Clifford got his running career started as a freshman at Wheaton High School back in the fall of 2015. Then his family moved to North Carolina and Clifford spent his sophomore season at A.C. Reynolds High School where he clocked a 3200 personal best of 9:50.79. This year he is back in the Old Line State at Albert Einstein High School where he has a chance to form one of the top duos in the state alongside Simeon Mussie. Clifford finished fourth at the Rebel Invitational last weekend and fifth on Saturday, and will definitely be a name to know heading deeper into the fall.