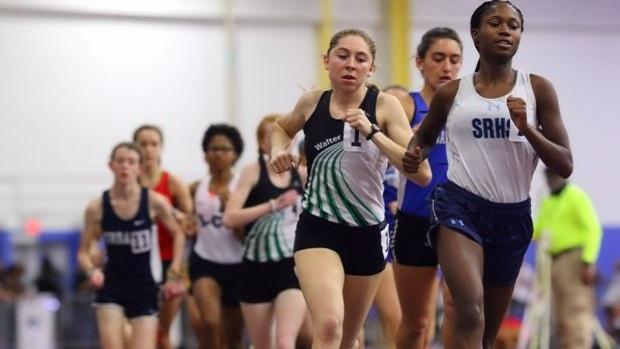 The Walter Johnson girls won the program's first-ever indoor state title two weeks ago at the 4A indoor state championships. They did it by racking up points in the distance events - a whopping 47 of their 53 points came from the 800, 1600, 3200 and 4x800. Their main contributor, of course, was senior Abigail Green, who came within one hundredth of a second from pulling off the rare 16-32-8 indoor triple.

However, one of those events stood out among the rest, and not entirely due to Green's performance. Rather, it was her teammate, freshman Ella Gaul, whose third-place finish in the 1600 deserves attention. Green's run of state-level dominance will come to a close when she graduates this spring, but the Wildcats look like they will have another young star capable of scoring major points in the distance events (along with sophomore Jenna Goldberg, who placed tenth in the 3200). 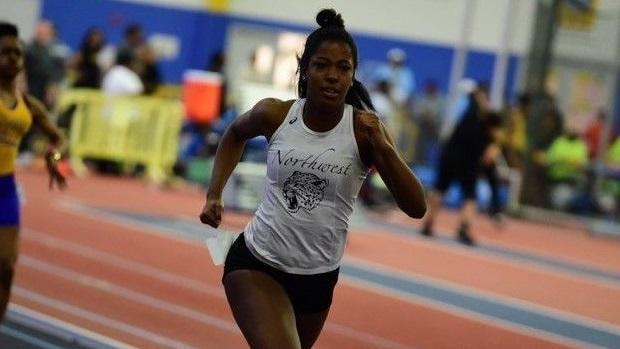 Abigail Green, Walter Johnson: There isn't much more to be said about Green's state meet performance. She came within a fraction (of a fraction) of a second from being the first girl since Arundel's Christy Nichols in 1996 to win all three distance events in the highest classification at the indoor state meet.

Emily Knight, Severna Park: Knight was the reason that Green didn't win all three distance events, but her state meet performance shouldn't be defined by what she kept Green from doing. Shortly before winning the 800, Knight also ran away with the 4A girls 500 - defending her title in the event from last winter. She also helped the Severna Park girls place second in the 4x400 relay.

Taylor Wright, Northwest: Wright racked up state titles number three and four, and she's still only barely halfway through her high school career. She won her first-ever 300 meter title, dropping her personal best under 41 seconds for the first time. She also won her second high jump state title, holding off Wheaton sophomore Madison Depry (more on her in a bit). Wright came within one thousandth of a second of winning the 4A girls 55 title, as well.

It looked like Ella Gaul was going to be the highest-finishing freshman of the day - until Ella Auderset got her turn in the 500. (Photo by Brandon Miles)

Ella Auderset, Urbana: It was a good day to be a freshman named "Ella". While Ella Gaul placed third in the 4A girls 1600, Urbana's Ella Auderset ran a 3.5-second personal best in the 500 to place second. It was the fastest 500 by a Maryland freshman since 2015 when eventual teammates Nyjari McNeil and Cameron Hinton both ran sub-1:16. 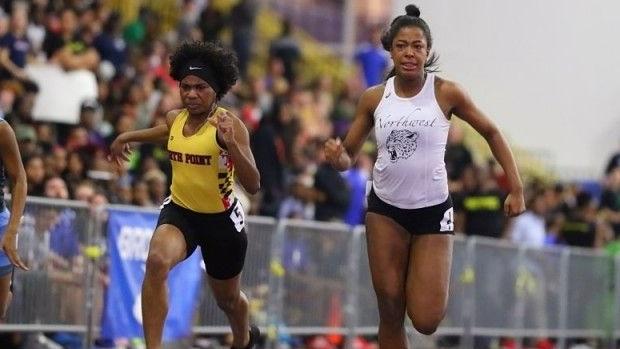 Carmen Henderson, North Point: There weren't a ton of surprise winners at the 4A state meet, but Henderson certainly wasn't the favorite in the 55 meter dash a month prior to the championships. After the SMAC Championships she owned a personal best of 7.40, but she turned it on at the 4A East Regionals, dropping it to 7.23. After finishing second in the prelims at the state meet, she edged out Taylor Wright in the finals by the absolute slimmest of margins - 7.208 to 7.209.

This close finish (which didn't actually end up being a close finish, unfortunately) set the tone for what was a thrilling day at the PG Sportsplex. (Photo by Brandon Miles)

Broadneck and South River 4x800: You won't find their time anywhere on the results page because they were disqualified, but the Broadneck girls ran one heck of a race in the 4x800 relay. Of course, congratulations still go to the South River girls, who ran a great race of their own. Unfortunately, the final results don't do this race justice. The good news? These two teams will have plenty of opportunities to race each other (and possibly Severna Park) during the spring!

Madison Depry, Wheaton: As a freshman, Depry finished third in both the 3A 100 and 200 meter dashes last spring. This winter, however, she added a new weapon to her repertoire: the high jump. She jumped 5'0 in early December and never looked back, eventually clearing 5'6 at the state meet, good for second place (and second-best by any Maryland athlete this season).