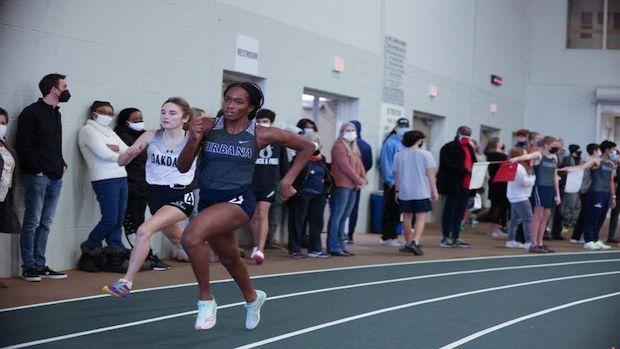 This past weekend saw lots of fast times and performances across the state from Baltimore County and Frederick County.

On the boy's side at the Baltimore County championships, we saw several athletes shine. After coming short in the prelims of the 55m, Daysen Shell of Milford Mill Academy come from behind and took the win in the 55m finals along with the 300m. Gavin Shaffer of Dulaney swept the 55mh during the prelims and finals as well as the high jump. In the middle distance events, it was all Korede Otusajo: pulling away easily in the 500m and narrowly edging out Tyler Dailey of Dulaney in the 800m. Dailey wouldn't leave the meet without a win, capturing a convincing victory in the 1600m. Dulaney continued their dominance in the relays winning the 4x400m and the 4x800m while Franklin took home the win in the 4x200m.

On the girl's sprint side, it was all Western Tech. The duo of Laila Gaynor and Samara Jones was projected to impress, but they managed to sweep all the sprint events from the 55m up to the 500m, while Denisha McLaurin of Woodlawn swept the 55mh. On the sprint side, the Hereford girls dominated. Piper Lentz and Estelle Snider went 1-2 in both the 800 and 1600, while Sylvia Snider placed 3rd in the 3200m. Onto the field events, Lizzie Lopez of Hereford won the girl's high jump and pole vault, while also placing 3rd in the 300m and runner up in the 55mh. Hereford took the women's title with an overwhelming 124 points and Dulaney captured the men's title with 79 points overcoming Towson High School, who took second.

Out in Frederick County on the boy's side, Travis Buakah of Walkersville put on a show in the long sprints with a win in the 500m and 2nd place in the 300m behind Simon Essono of Gov. Thomas Johnson. In the 55m, it was all Brody Buffington of Catoctin, also managing to snag a 3rd place finish in the shot put. John Sears of Linganore swept the 1600m and 3200m with an 11 second and 6-second win respectively. Linganore's depth also showed in the 800m as Samuel Metzner and Kyle Walker of Linganore notched 2nd and 5th while Christopher Sappe of Urbana picked up the win. Tuscarora's Edwin Niemandt and Adebola Adeyemi also showed out in the high jump going 1-2 while also working together to pick up a win in the 4x200m.

Onto the girl's side, Linganore's girls dominated with Melanie Barger and Payton Arneson going 1-2 in the 55m, Barger coming in 2nd in the 55mh, and Mikayla Moxley coming in 4th in the 300m. Moxley continued Linganore's dominance with a win in both the 500m and 800m, as well as a 2nd place in the 4x400m and Juliana Nardini took home the win in the high jump. Even in the 1600m and 3200m, Caroline Perrone and Katelin DeFilippis went 2-3 in the 1600m and 1-2 in the 3200m with Ivy Coldren of Urbana taking the potential 1-2 away. On the relay side, it was a tight battle between Linganore and Urbana with Urbana taking the win in the 4x200m and 4x800m with Linganore taking the 4x400m. Urbana also went 1-2 in the shot put with Fiona Agyekum and Samantha Heyison beating 3rd place, Taylor Hillard of Tuscarora, by 7 feet and 2 feet. Over all Urbana High School's women dominated, earning the team title with 150.5 points and the Oakdale men won the Fredrick County championship with 93 points.

Check out the full results from championships