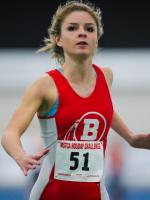 Top Returners: Girls 200 Meter Dash...
Amanda Henson leads all Top Returners with her 24.43 clocking in the 200 Meter run. Here is the list of all the top returners....

Record Setting Day At The Boston Holiday Challenge...
Marshfield&#39;s Ellen DiPietro gave the Reggie Lewis Center crowd something to cheer about early in the season. DiPietro soared over 5 feet, 9 inches to break the meet record Saturday at the Bosto...

Top Returners: Girls 55 Meter Dash...
Milesplitmass will be running the Top Retuners in each event all week long. Today we look at the Top returners in the 55 Meter Dash....

MIAA ALL STATE LIVE HIGHLIGHTS...
Milesplitmass will be broadcasting these almost live photo&#39;s from Trackside in Westfield....

Boston Globe: Newton North Gets to Wear Two Crowns...
It was a double win for Newton North as its boys’ and girls’ track teams swept the MIAA Division 1 championships Monday in Andover.The Newton North girls placed in 11 of 18 events, combining for...