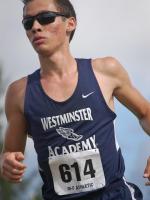 1A Region By Region Virtual Meets...
Want to punch your ticket to the state meet? It's never too early to start looking at the competition. Leading up to the start of the outdoor season we will break down each classification. Take a look...

Westminster Academy Prepares For 1A State Finals...
Wednesday was our last varsity track workout of the year before state. As practice came to an end, I just remembered how the year started. We were all optimistic and anxious for the season to begin. G...

Westminster Academy Sweeps 1A Region 4 Championships...
On Thursday,  1A Region 4 meet was held, and it sure was a night to remember for many. The day started off late due to a rain delay, so the 4x800m relay popped off at about 2:30. The winner of the re...

1A Team Scores: Can Westminster Academy Double? Boys Sl...
We are getting into the heart of the season. The state championship is less than two months away. We wanted to see which teams would have the best shot at podium finishes if we crunched the numbers to...

AAU Club Nationals: Day 8 Boys Summary (Final Day)...
Alright, here’s the absolute final recap of the AAU Club Championships: Boys Edition. Even though this meet from a boy perspective was very competitive and a strategic week long competition because ...