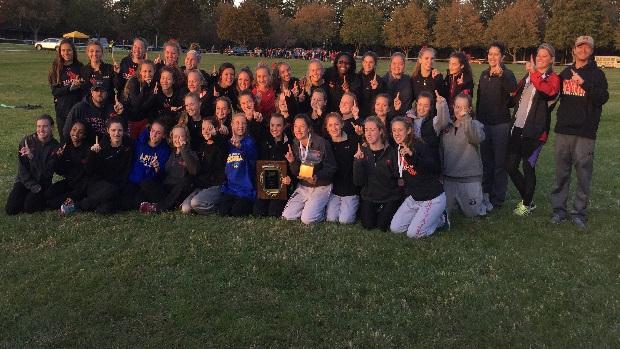 The Maryvale Prep girls defended their 2015 IAAM conference championship on Tuesday at Stevenson University. It is their third championship in four seasons (they won the IAAM 'B' race in 2013). They were once again led by senior Emily Craig, who finished second in a season-best 19:10.50, and freshman Rachel Thomas who finished sixth and cracked the 20-minute mark for the first time.

The Maryvale Prep girls edged out Archbishop Spalding, who were led by a pair of standout freshmen: Lacey Eden (first, 19:05.75) and Allysa Combs (third, 19:29.32). Four of their top five finishers were freshmen which paints a very positive picture for their future. Eden currently sits in second among freshmen girls in the state behind C. Milton Wright's Haley Cummins.

It was a pair of freshman that also helped the Roland Park Country girls win the B race at Tuesday's meet: Alayana Gibson (first, 20:34.59) and Elizabeth Currie (second, 21:03.29). The girls from the Park School placed four runners in the top ten to win the C race.