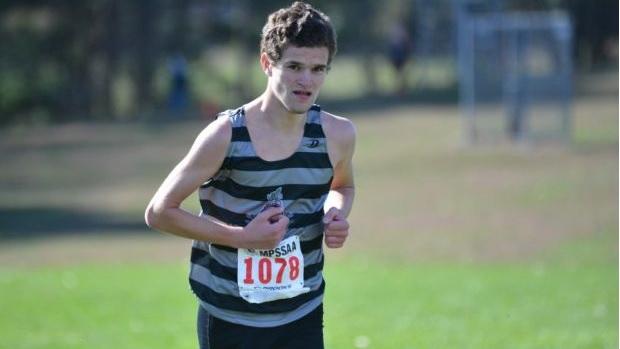 Vote for the best boys state cross country moment in the past five seasons! The state meet course has changed twice over the past five years but there have still been some great performances and storylines in that timespan. Let's revisit some of the most memorable:
2014 - Fransham Edges Eisenhauer In Mad Dash To Finish
In the first year on Hereford's new, slightly-altered course, seniors Nick Fransham and David Eisenhauer found themselves in quite a battle for the 3A individual title. Coming up the dip Eisenhauer appeared to break away, but Fransham came back out of nowhere and passed Eisenhauer in the final 50 meters for the win. Fransham's (15:41.30) and Eisenhauer's (15:42.10) times are still the top two times run on the new Hereford course.
2012 - Forsyth Finishes Second With One Shoe, Leads Severna Park Boys
In the beginning of the 2012 4A boys race there was a large pile-up of bodies on the ground shortly after the gun. Severna Park junior Ryan Forsyth lost his shoe but kept right with the leaders, eventually pulling away from Perry Hall's Vincent Ciattei to finish second (Clarksburg's William Bertrand ran away with the win, recording the third-fastest time at the state meet since 1995, only behind Maryland greats Solomon Haile and Matthew Centrowitz). However it was Forsyth with the biggest performance of the day, as the Severna Park boys ended Walter Johnson's four-peat of state championships and would begin what would become a three-peat of their own.
2011 - Sheehan Pulls Off Upset Of The Year
Heading into the 2011 4A boys race, Walter Johnson senior Scott Sheehan had never won a major cross country race in his career. He came into the meet having finished seventh and sixth at the county and regional meets, respectively. So what did he do? Only break away from the pack in the final mile to capture the individual title by seven seconds. More importantly, he led a Walter Johnson team that had lost at the county and regional meets to Churchill to its fourth straight state championship.
2011 - Hereford Beats Linganore By Three Points, Defends Home Course
The Hereford boys have traditionally raced very well on their home course at the state championships, but they were certainly challenged in 2011 by a solid Linganore team led by senior Braden Bruning (first) and junior Patrick Duboyce (third). However, Hereford's fifth runner (junior Gabe Rivera) finished fifteen places ahead of Linganore's, which made the difference as Hereford won by a mere three points. It was the second of three straight titles for the Hereford boys, who were reclassified to 2A in 2013.
2015 - Walz, Dulaney Boys Halt Severna Park
It was expected to be one of the closest races at the state meet. The three-time defending state champions from Severna Park had held off Dulaney by three points at the Bull Run Invitational, and many were anticipating another airtight battle. Dulaney, however, came to race: not only did Eric Walz capture the individual title, fellow senior Andrew King turned in a crucial third-place performance as Dulaney put their top six runners among the top 20 overall finishers. The Lions ended Severna Park's hopes for a four-peat, scoring just 37 points to the Falcons' 76.
Voting ends at 11:59 PM on Friday!
Tweets by MileSplitMD