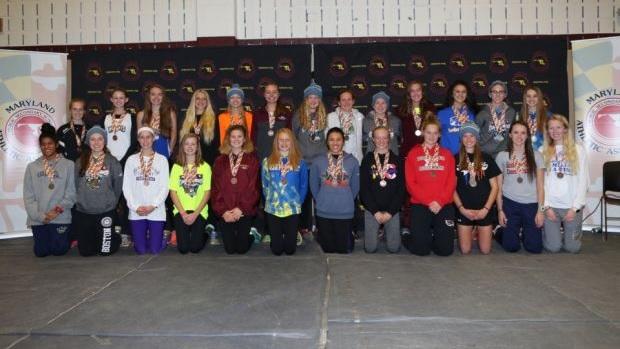 Next weekend, eight different individual state champions will be crowned. Can we predict who they will be using the regional meet results? (Photo by John Roemer)

Last season, Northern Garrett's Ana Rhoten turned in the most surprising performance of the state cross country meet. Rhoten won the 1A state championship by nearly 30 seconds, pulling away from the field on the second half of the course and never looking back as she charged up The Dip. Why was it so surprising? Because, just nine days earlier, she had not emerged victorious from her regional meet. In fact, she wasn't even second: she finished fifth at the 1A West Regionals.

Here were the four other instances:

2014, 4A Boys: After breaking away at the 4A West Regionals, Diego Zarate (Northwest) tried to pull away early but couldn't quite break Evan Woods (Whitman), who surged ahead in the second half of the race to end Zarate's undefeated season.

2014, 4A Girls: Abby Green burst onto the scene as a freshman by winning a wild 4A West girls' race; but at the state meet, Nora McUmber (B-CC) regained her form that had helped her win the NXN Southeast Regionals as a junior.

2014, 3A Girls: Emily Mulhern (Urbana) did not run at the 3A West Regionals (her teammate, Maria Carberry, did and won). Mulhern won the state meet, with Carberry right behind in second place.

2014, 2A Boys: Chad Sussman (Liberty) won a stacked 2A West Regionals race, but the 2A state meet was dominated by Zach Gascho (Catoctin), who led the Cougars to their second straight team title. Sussman finished seventh, behind 2A West competitors Gascho, Hal Reichard (Walkersville) and Patrick Van Der Cruyssen (Catoctin).

So what does all of this mean? Pay attention to the regional races on Thursday! Chances are very high that the eventual state champion for each classification and gender will be one of the four regional champions. But will there be any regional meets with enough competition at the top to buck the trend? Here are the top threats:

4A West Boys: Four runners from the 4A West region finished between 15:35 and 15:43 at the Montgomery County Championships, with another three coming in under 16 minutes. Adam Nakasaka (B-CC) and Mark Unger (Richard Montgomery) have gone back-and-forth enough this season that it wouldn't be too big of a surprise to see one win regionals and the other win states.

4A East Boys: There's a very good chance that the regional champion will hail from Severna Park after they put six in the top seven at the Anne Arundel County Championships. While junior Garrison Clark has established himself as the team's top runner, another one of their top seven could emerge victorious if they decide to run as a pack on the very tough course at Arundel High School.

3A West Boys: Of the four 3A regional races, the 3A West figures to be the closest at the top, featuring a battle between juniors Michael Belmaggio (Linganore) and Nate Neely (North Hagerstown). Both will likely have to contend with Bel Air's Kieran McDermott, who owns the fourth-fastest 5K mark in the Maryland, at the state meet.

4A East Girls: Possibly the must-watch race of this year's entire slate of regionals, featuring a rematch of the Anne Arundel County Championships where three girls finished between 17:56 and 18:07. Throw in star freshman Nelle Ray (Leonardown, coming off a dominant win at the SMAC Championships) and it's possible that this race features four of the top five runners in 4A. Of course, they will all have to contend with Walter Johnson's Abigail Green at the state meet.

3A South Girls: Northern's trio of Abby Sweeney, Claudia Dolan and Sarah Deresky is a big reason why the Patriots are shooting for their second straight state title. Any three of them could win the regional title, especially if they find themselves at the front of Thursday's race. The state meet, however, could be a different story with the field chasing defending state champion Haley Cummins.

2A South Girls: Coming off a 1-2 performance at the Howard County Championships, River Hill's Jasmine Tiamfook and Faith Meininger could again find themselves at the front of the pack at the 2A South regionals. A matchup with fellow 2A newcomer Nandini Satsangi (Poolesville) would follow at the state championships.