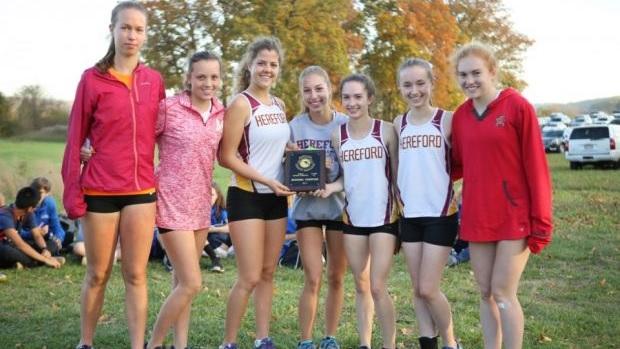 The four 2A regional meets on Thursday afternoon set the stage for next weekend's state meet. Here were the biggest moments and storylines.
Hereford Girls Breeze In States Tune-Up
The two-time defending state champions sat out their entire top five at the 2A North regionals and still managed to sweep the top five spots en route to another regional title. The Bulls currently lead the 2A team rankings, and will be a force to be reckoned with at the state meet. Junior Emily Konkus, this year's Baltimore County individual champion, placed fourth at the state championships last year and ranks seventh among 2A girls so far this year. There will be plenty of teams aiming to end Hereford's state meet streak next Saturday, but they will also have their home-course advantage.
Fallston Boys Use Tiny Spread To Overcome Kent Island's 1-2 Finish
Kent Island's Erick Sanchez and Brandon Nichols have comfortably finished 1-2 in their past three races, including Thursday's 2A East regionals. While they could very well be the top duo in the 2A classification this year, their performance wasn't enough to hold off the tightly-packed Fallston boys in the team scores. All five of Fallston's scorers finished in the top 15 with the tightest spread (37 seconds) out of any of the teams in the race. Both squads will be looking to make some noise in the top ten at next week's state championships.
Youth Shows Up Strong At 2A West
Only three of the top nine girls in the 2A West regionals this season were seniors - the same amount as there were freshmen. The top two freshmen in the region? Winters Mill sisters Makenzie and Kathryn Hopkins who placed third and eighth, respectively. The team finished third overall (just five points behind the winners from Liberty) and featured no seniors. Overall there were 11 total freshmen among the top 27 finishers from six different schools; South Carroll featured the highest total among them with three.
Calvert Boys Don't Just Look Good - They Look Great
There is plenty of reason to look forward to the matchup between the two-time defending 2A state champions from Liberty and the three-time defending 3A champs from River Hill, but a third team appears to have surpassed them both. The Calvert boys looked like a team on the rise heading into last season and everything has come together this fall; led by junior Justin Diehl, the Cavaliers easily topped River Hill at the 2A South regionals, placing their entire top seven among the top 15 runners. It was no fluke, as the Calvert boys put all seven runners under 17:00 at the Great American XC Festival.
Tweets by MileSplitMD