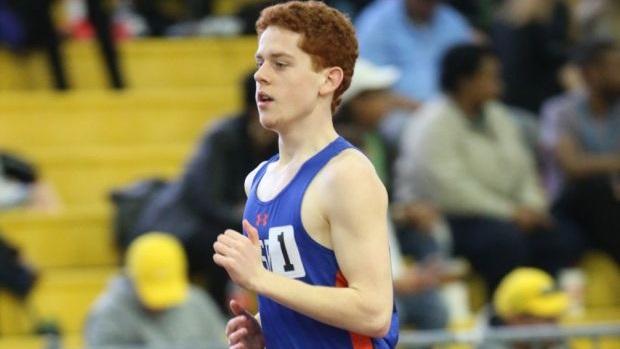 Like their female teammates, the Boonsboro boys entered Monday's state meet as the defending 1A indoor champions. And like the girls, they faced a stiff challenge from one of the classification's newcomers: Henry E. Lackey. The two teams went about racking up points differently, with Boonsboro dominating the mid-distance and distance events and relays, while Lackey scored more in the sprints and the throws.

Ultimately the teams were separated by just three points, and when the scores are that close, the team with the best usually rise to the top. On Monday it was Boonsboro junior Donovan McClellan, who won the 500 and the 800 and ran a leg on the victorious 4x800. It was enough for the Warriors to capture their second straight 1A indoor team title. 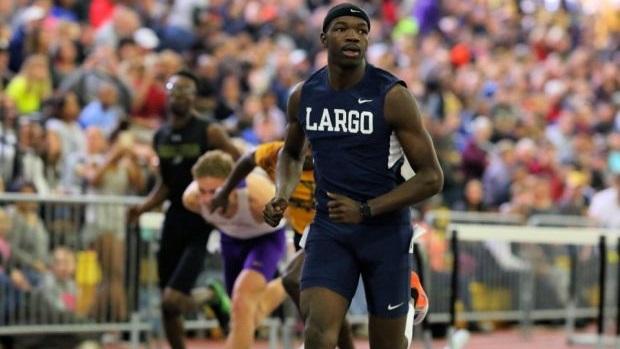 Is it possible that his 1A state meet record in the 55 hurdles wasn't even the most impressive race of the day from Largo's Aaron Hackett? (Photo by Craig Amoss)

Aaron Hackett, Largo: Don't mind the fact that he now competes in the 1A classification - his speed plays at any level of competition. His flat-track 34.86 300 was the fastest across all classifications at the state meet. He lost only twice in the event all season: once at the Marine Corps Holiday Invitational, and then in the loaded section at the SMAC Classic, where he set his personal best of 34.83. For good measure he also captured state titles in the 55 dash and hurdles, and helped the Lions finish second in the 4x200 relay.

Declan Horner, Southern Garrett: It had been a long time coming for one of Maryland's top distance runners, but Horner captured his first (and second) state titles on Monday in the 1600 and 3200. Being virtually isolated from the rest of the state in Garrett County, Horner doesn't often get the chance to go head-to-head with Maryland's best, but his 9:27.91 personal best from last spring is the fourth-fastest among returning athletes heading into outdoor.

Donovan McClellan, Boonsboro: McClellan was instrumental in Boonsboro's successful state title defense, contributing to 34 of the team's 69 total points. In his final event of the day, he came back to defeat Loch Raven's Garrett Harris - last spring's 2A 1600 runner-up - in the 800.

Alijah Johnson, Frederick Douglass-PG: The Douglass boys finished fourth in the 1A team scores behind a deep sprint squad, including senior Alijah Johnson. Johnson's second-place finish at the 1A East Regionals was easily his best showing of the season until he also finished second at the state meet. The difference, however, was nearly a two-second personal best time of 35.04 that catapulted him into fifth on the Maryland leaderboard. 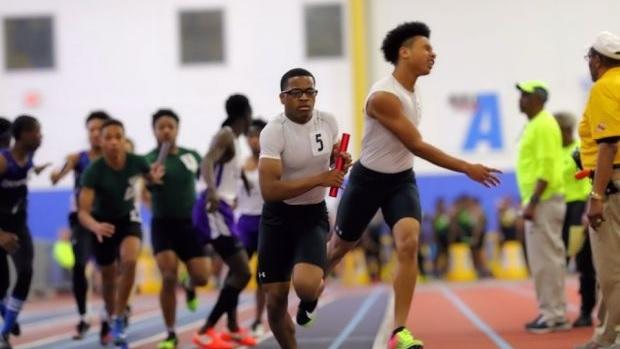 The CMIT Academy boys finished fourth in the 1A 4x200 out of the slow heat, dropping their school record in the process. (Photo by Craig Amoss)

CMIT Academy 4x200: The Chesapeake Math and IT Academy in Laurel is one of the newest schools in the state (opened in 2012, reached full capacity grade-wise in 2016 according to PGCPS) and has recently begun fielding a track team. The team set a school record of 1:38.03 on Monday, good enough for fourth place in the 1A 4x200. 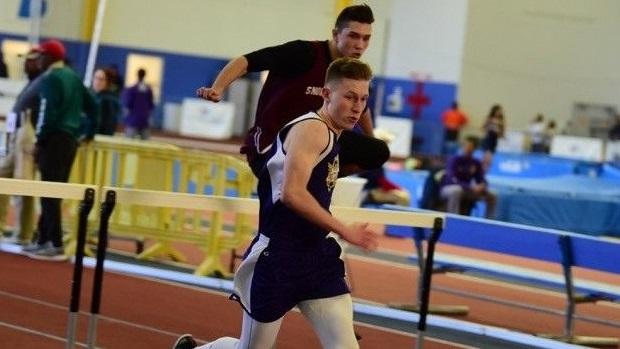 Hurdle capital of the eastern shore? Kyle Noll and the Crisfield boys went 2-3-4 in the 55 meter hurdles at the Bayside Conference Championships - impressive for the 11th-smallest school in the state, according to the MPSSAA. (Photo by Brandon Miles)

Kyle Noll, Crisfield: Hailing from the eastern shore at one of the smallest schools in Maryland, Crisfield sophomore Kyle Noll finally got to showcase his talent on the big stage. After winning the 1A East regional high jump, he finished second at the state meet, tying his personal best of 5'8. He also ran a personal best of 8.59 in the 55 meter hurdles, finishing just one spot away from advancing to the finals.