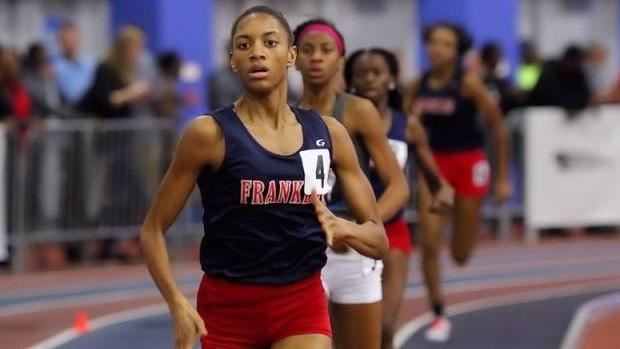 Franklin's Nyjari McNeil capped off her indoor career in the state of Maryland by setting a new state meet record in the 500 meter dash. (Photo by Craig Amoss)

The Franklin girls have built a juggernaut - that much is clear. At the forefront is senior Nyjari McNeil, who entered last week's 3A state meet with nine individual titles already under her belt. Numbers ten and eleven included her fourth straight 500 meter title, one she has never lost as a high schooler. The performance was even more noteworthy considering she shattered the decade-old state meet record.

Beyond McNeil, however, the Franklin girls still have one of the top sprint teams in the state. Cameron Hinton won the 300 and finished fourth in the 500. Jasmine Johnson finished second in the 500. Tylar Colbert scored in both the 55 and the 300. They finished no lower than fifth in any of the three relays. It was more than enough for the Franklin girls to comfortably capture the 3A girls team championship. 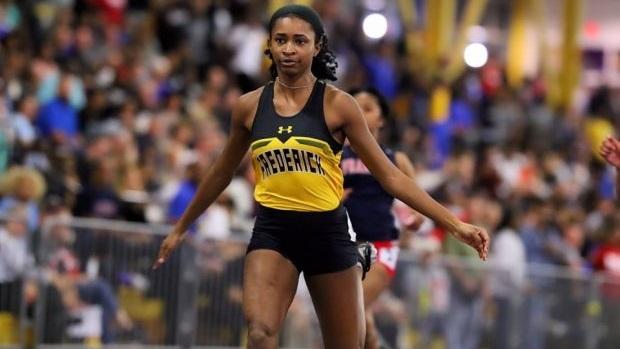 Cameron Hinton, Franklin: Before Nyjari McNeil broke the 500 state meet record, her teammate had already won a state title of her own. In fact it was her second straight victory in the 3A 300 meter dash as she defended her 2017 title. Hinton's time of 39.37 was her personal best on any track, flat or banked. She came back to finish fourth in the 500 and then ran a leg on Franklin's state-meet-record-setting 4x400 relay.

Nyjari McNeil, Franklin: Two overall indoor state meet records were set at the 3A state championships last week and McNeil played a part in both. She began her day by breaking Tasha Stanley's ten-year-old state meet 500 meter record of 1:13.62 (McNeil ran 1:13.30, the fastest flat-track performance of her career). Then after just missing the 3A state meet record in the 800, she came back and helped Franklin take down Roosevelt's state meet 4x400 record by just three-hundredths of a second. All told McNeil contributed to 30 of Franklin's 72.50 overall team points.

Jaida Smith, Frederick: Smith lost only one 55 meter dash race all season (the finals at the Montgomery Invitational, where she finished second) and saved her best for last. After dropping a season-best 7.06 in the prelims, she took off in the finals, running a new personal best time of 7.01. She also finished third in the 300 by breaking 41 seconds for the first time, a performance she talked about after her win in the 55 dash. 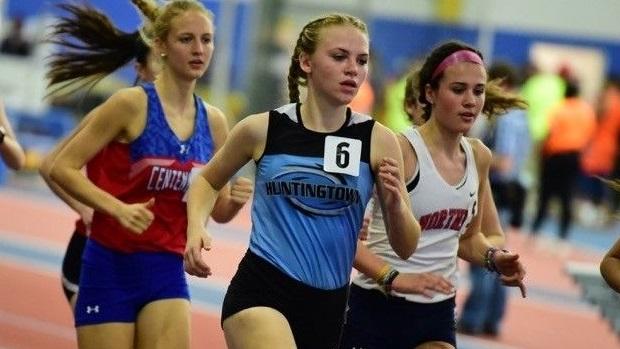 Huntingtown freshman Oakley Olson was not fazed by her big workload at the indoor state meet. (Photo by Brandon Miles)

Oakley Olson, Huntingtown: Olson was one of the top freshmen in the state during the cross country season, placing fifth at the 3A State Championships, and she carried the momentum into the winter. She ran one of the toughest triples at the state meet: 4x800, 1600 and 3200, and placed fifth or higher in all three. Huntingtown scored 32 points at the state meet and Olsen had a hand in 14 of them.

Jaiden Ritter, Mount Hebron: Ritter entered her junior season with a 55 meter dash personal best of 7.52. Throughout the season she worked that mark down to 7.24 in a runner-up finish at the Howard County Championships. She found another gear, however, at the state meet - after running 7.17 in the prelims, she dropped a 7.12 performance in the finals, good for second place. 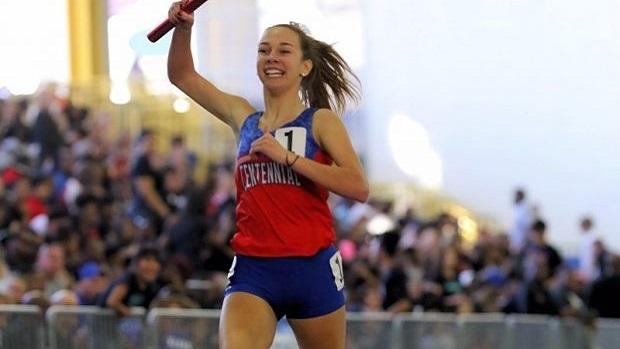 Centennial's Alison Betler celebrates while crossing the line at the end of the 3A girls 4x800. (Photo by Craig Amoss)

Centennial 4x800: The first final of the day was also one of the best, as four schools - Centennial, Tuscarora, Northern and Huntingtown - battled it out for the 3A girls 4x800 title. When the dust settled it was the Eagles who emerged victorious, one of just six teams to run under ten minutes at the state meet this year. 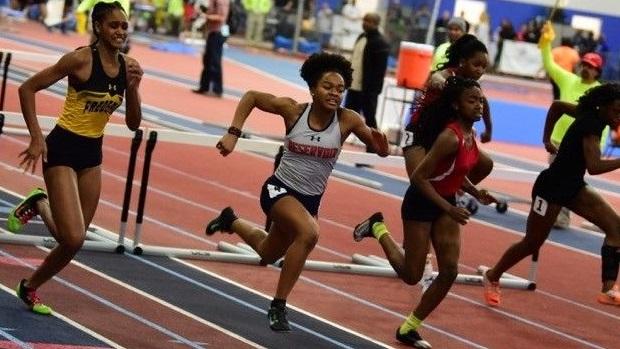 Reservoir's Adaobi Tabugbo emerged as a star during her sophomore indoor season. (Photo by Brandon Miles)

Adaobi Tabugbo, Reservoir: After a solid freshman spring season during which she qualified for the state meet, Tabugbo caught fire down the stretch this winter. She set new personal bests in each of the last four 55 meter hurdle races she ran, including victorious efforts in both the prelims (8.46) and finals (8.43) at the state meet.