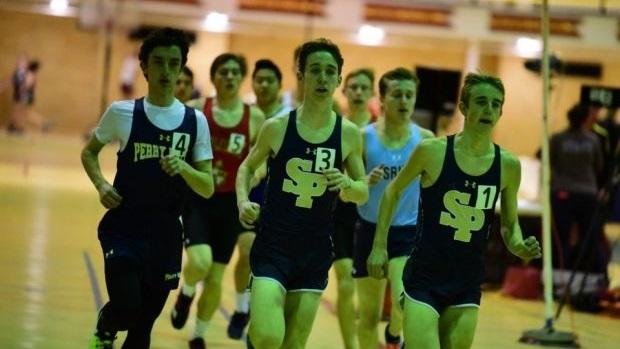 Which Severna Park boy became the next in a long line of sub-10:00 two milers this past weekend? (Photo by Brandon Miles)

Each weekend we'll highlight a few of the top breakout performers from the past week of action around the state! This list is not meant to be totally comprehensive, and might end up getting shorter as the season wears on, but here are the top breakout performers from the week of 4/2-4/7.
Koffi Adjeoda-Seponou (Paint Branch, Freshman): Eighth in 9/10 1600 at Carolyn Legard Relays. Brought 1600 personal best from 5:14 to 4:51. Was the top Maryland athlete in the race and is sixth on current state freshman leaderboard.
Matthew Bateman (Severna Park, Junior): Sixth in 3200 at District V Challenge. Brought 3200 personal best from 10:28 to 9:55. Was one of four Severna Park runners to break 10 minutes at the District V Challenge on Friday.
Kimani Benjamin (Fairmont Heights, Senior): Third in high jump at Largo Lions Invitational. Cleared six feet after entering with a personal best of 5'2. Currently tied for Prince George's County lead in the event.
Jaylin Davis (Meade, Senior): Second in 300 hurdles and third in 110 hurdles at District V Challenge. Cut nearly three seconds off personal best in the 300 hurdles (46.26 to 43.44). One of three Meade hurdlers to run between 15.69 and 15.71 in the 110 hurdles at the District V Challenge.
Kimayah Faye (Reservoir, Sophomore): Third in the triple jump at the District V Challenge. Added nearly two feet to her triple jump personal best (32'3.50 to 34'0.00). New personal best is also currently the third-best mark by a sophomore in the state.
Ian Fokum (Huntingtown, Junior): Third in the 800 at the Largo Lions Invitational. Shed five seconds off his personal best, down from 2:07 to 2:02. His current season best of 2:02.53 ranks third among all 3A competitors in the event.
Taylor Gillis (Glenelg Country, Junior): Won the high jump at the Quince Orchard Cougar Relays. Opened up her season with a 4'10 effort, which is tied for the best jump by a private school athlete this season and tops the IAAM leaderboard.
Desmond Johnson (Henry A. Wise, Freshman): Won the freshman 100 at the Largo Lions Invitational. Dropped his personal best from 11.46 to 11.11, the fastest freshman time in the state. Ranks among the top 40 freshmen in the country in the event.
Malaysia Latimer (Elizabeth Seton, Freshman): Second in the freshman 100 at the Largo Lions Invitational. Brought her season best down from 13.04 to 12.63. Currently ranks as the fastest freshman in the state and third-fastest runner in the WCAC.
Carissa Lauer (Huntingtown, Junior): Won the high jump at the Largo Lions Invitational. Entered with a personal best of five feet but wound up clearing 5'4. Lauer is currently tied for second on the state leaderboard.
Xander McClure (Linganore, Freshman): Second in the high jump at the Linganore Lancer Invitational. Freshman cleared 5'10 in first high school action, the only freshman to do so this spring.
Rebekah Shullenbarger (Brunswick, Freshman): Won the 800 at the Charas Heurich Invitational. Freshman in her first track action placed third in the 400 before winning the 800 with a 2:31.95 effort, the eighth-fastest by a freshman so far this spring. Also showcased some versatility, finishing seventh in the high jump.
Kobe Vanzego (C.H. Flowers, Junior): Won both the shot put and discus at the Largo Lions Invitational. Demonstrated huge improvements in both events (37'6.50 -> 43'10.00, 97'2 -> 125'0) from season opener at Urbana Invitational. Current Prince George's County leader in both events.
Tweets by MileSplitMD