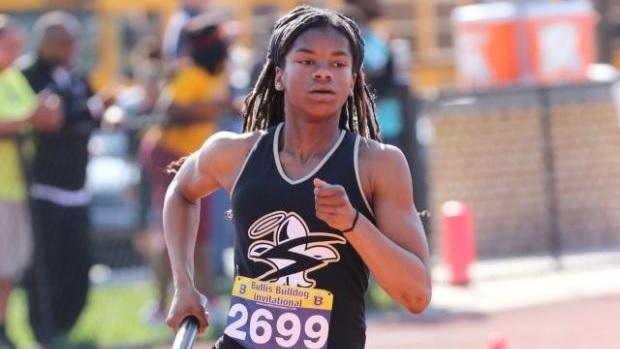 The Neumann Goretti (PA) girls blew the 4x800 field out of the water, breaking the meet record and setting a new state-leading time in the process. (Photo by Craig Amoss)

The Bullis Bulldog Invitational is getting close to re-defining the definition of a "mega-meet", at least when it comes to Maryland. It's attracted schools from Virginia to Connecticut, with this year's enormous field continuing the meet's trend of getting bigger every year. And not just bigger, but better, too, in terms of the performances. A staggering 21 meet records were broken at Saturday's meet; now that the dust has settled and everybody has been accounted for (we hope), let's recap all eight on the girls' side.

3200: T.C. Williams' Lena Cromley and Stone Ridge's Genevieve DiBari went toe-to-toe with each other in the girl's 3200. Both girls ran personal bests and faster than the old meet record of 11:42, as Cromley's time of 11:36.69 now stands as the one to beat moving forward.

300 hurdles: Masai Russell must have felt right at home on Saturday, because she churned out a US #1 40.70 performance in the 300 hurdles (three and a half seconds better than the previous meet record). The Western Branch girls went 2-6, led by junior Adriana Shockley who also shattered the old meet record.

4x800: The Neumann Goretti (PA) girls didn't come to Bullis this weekend to mess around: they dropped a PA #1 9:27.63 in the 4x800 relay early in the day, nearly fifteen seconds faster than Western Branch's winning time from 2017. They were the runners-up at this winter's PTFCA Indoor State Championships and this solid solo effort should bode well for the weeks to come for the Neumann Goretti girls.

High Jump: Osbourn Park's Sydney Banks upped her season best in the high jump to 5'6 with a win at Saturday's Bullis Bulldog Invitational, well past the old meet record of 5'2. Banks jumped 5'11 at her regional meet last spring and is currently tied for third in the high jump on Virginia's state leaderboard.

Triple Jump: It was a big day for Bullis senior Cierra Pyles, as for the second time in her high school career (and first so far this season) she cleared 40 feet in the triple jump. Her 40'3.50 effort smashed the old meet record by nearly two feet, and is easily the best jump so far this year in Maryland.

Shot Put & Discus: One girl, two records. James Monroe's Alexis Clark was on a mission Saturday, because although neither of her shot put or discus efforts were even season bests, she walked away from a deep group of throwers with two different meet records.