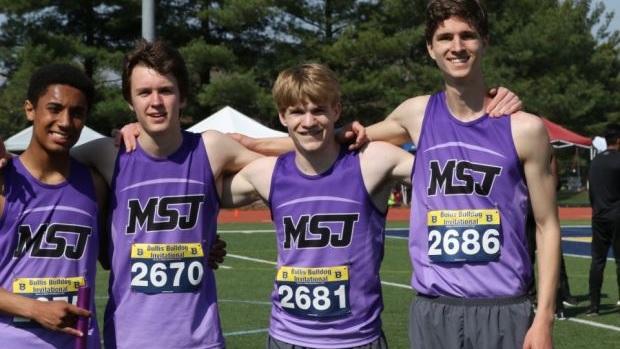 The Mount St. Joe's boys might not stop until they have every relay meet record at the Bullis Bulldog Invitational. They broke the 4x800 meet record this year with a MD #3 8:07 performance. (Photo by Craig Amoss)

The Bullis Bulldog Invitational is getting close to re-defining the definition of a "mega-meet", at least when it comes to Maryland. It's attracted schools from Virginia to Connecticut, with this year's enormous field continuing the meet's trend of getting bigger every year. And not just bigger, but better, too, in terms of the performances. A staggering 20 meet records were broken at Saturday's meet; now that the dust has settled and everybody has been accounted for (we hope), let's recap all eleven on the boys' side.

100: Bullis senior Eric Allen breezed through his 100 meter dash prelim, running the second-fastest time of the trials (10.73, behind only Field's Justin Ofotan). He saved the best for last, however, dropping a 10.46 performance in the finals to take down the meet record set last year by St. John's Eric Harrison. Both Northeast's Davon Carroll and T.C. Williams' Ibrahim Bangura dipped below the previous meet record of 10.62, as well.

200: Carroll couldn't edge Bullis on his own track in the 100 meter finals, but he made sure he walked away with at least one first-place effort (and a meet record) later in the day in the 200. He shaved a hundredth of a second off his personal best (21.31 to 21.30) and finished a solid half second ahead of a deep field that featured five boys under 22 seconds.

400: St. Joseph's (PA) Miles Green seems to enjoy running one lap around a track - with or without hurdles. He just missed a personal best in the 400 meter dash, but his 47.83 performance was just good enough to best Ken Nelson's previous meet record from last spring. Even more impressive? This was just about an hour after setting another meet record...

800: The day was getting long by the time Neumann Goretti's (PA) Kamil Jihad stepped onto the track for the 800 meter run. The 1:52 half-miler didn't have to reach quite that far to pull out the win as three other boys broke the two-minute barrier. He also just missed the top spot on the Pennsylvania state leaderboard in the event.

3200: Not too long after anchoring the Gaels to a win (and meet record) in the 4x800 relay, Mount St. Joe's Hunter Petrik rolled to the win in the seeded section of the 3200. His 9:34 indoor performance shows he can certainly run much faster than he did in his win on Saturday, but his season-opening time of 9:52.62 is still the third-fastest private school time in the early going.

110 Hurdles: It was a bad day to be the holder of a meet record in the hurdle events. South Hagerstown's Andre Turay rolled in both the prelims and finals of the 110 meter hurdles, narrowly missing being the first Maryland athlete this season to dip under 14 seconds in the event. He still managed to break William Henderson's 14.02 meet record and landed among the top 20 hurdlers in the country.

300 Hurdles: It was a bit surprising that nobody had broken 40 seconds in the 300 meter hurdles at the Bullis Bulldog Invitational before this season (or not, considering the meet also features the 400 meter hurdles). Western Branch sophomore Quinton Massie broke the meet record by himself in the seventh heat, and then saw four more boys in heat 14 run even faster, led by DuVal's Adetomiwa Adebayo.

400 Hurdles: Miles Gray, again! Maybe he could win a 400 meter bike race? Either way, he broke the meet record in the 400 meter hurdles, as his 52.50 effort would have placed him in the top third of boys competitors in the 400 meter dash. 52.50 is the second-fastest current time in the United States.

4x100: In a showdown of the states, it was Virginia coming out on top, as the Battlefield boys absolutely threw down a 42.02 performance in the final heat of the event. Only the Nansemond River boys have run faster this year when it comes to the state of Virginia.

4x800: The Mount St. Joe's boys kicked off last year's Bullis Bulldog Invitational with a meet-record and Penn-qualifying performance in the distance medley relay (one of the few meet records that survived this past weekend, as well). This year the Gaels captured another meet record, running 8:07 on the dot to rank as the third-fastest relay team in the state so far this season behind Oakdale and Severna Park.

Sprint Medley: The East Orange (NJ) boys ran away with the sprint medley title from the gun, edging the meet record set last year by Dalton Hengst and the McDonogh boys. Their time of 3:30.91 ranks among the top ten times in the country this year.