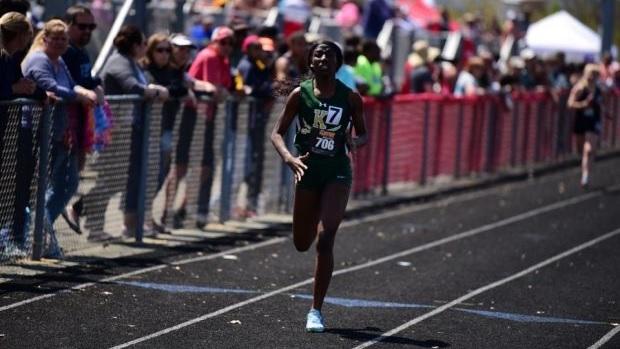 Kennedy's Tamia Howard broke a huge milestone in the 400 at the Gator Invitational last Saturday. (Photo by Brandon Miles)

Keivon Bowman (Overlea, Senior): Fifth in the discus at the Gator Invitational. Added over ten feet to his personal best (117 to 127) to lift him into the top ten in the 1A classification this spring, and second-best in Baltimore County.

Donte Busey (North County, Senior): Third in the 400 at the Gator Invitational. Busey took advantage of the relatively warm weather last Saturday afternoon and broke 50 seconds in the 400 for the first time (came into the meet having never gone under 51 seconds). Only South River's Isaiah Jensen has run faster among Anne Arundel County competitors this year.

Evan Couvillion (Hungtingtown, Sophomore): Fourth in the 300 hurdles at the Gator Invitational. 42.76 effort was a two-and-a-half second personal best in the event and nearly got him a win at Saturday's race (winning time was 42.07). Currently owns the fourth-best time in the SMAC.

Jordan Foster (Mount Hebron, Freshman): Won the discus at the Emerging Elite Invitational. 86-foot performance was nearly 20 feet better than her best effort of the spring heading into Friday's meet. It's the top freshman performance in Howard County so far this spring and fourth-best among all Maryland freshmen.

Tamia Howard (John F. Kennedy, Junior): Fourth in the 400 at the Gator Invitational. Broke 60 seconds in the event for the first time on Saturday at Reservoir, with almost a second to spare (59.12). It was a personal best time by nearly two seconds and is the fifth-best performance so far among Montgomery County competitors this spring.

Cole Prodoehl (Westminster, Senior): Fourth in the 100 at the Gator Invitational. Set a new personal best of 11.45 in the prelims, then blew it out of the water with an 11.23 effort in the finals. His time moves him ahead of teammate Zane Lewis for the top spot in Carroll County.

Jadon Ra-Akbar (Calvert Hall, Freshman): Second in the long jump and fourth in the triple jump at the Emerging Elite Invitational. Moves into the top ten in both events on the Maryland freshman leaderboard, as well as the top ten on the MIAA leaderboards.

Isabelle Sajonia (Quince Orchard, Senior): Fifth in the 3200 at Cassell's XBC Track Experience. Perhaps Sajonia found her personal secret to the 3200 - compete out-of-state - because her 11:24 personal best was nearly 20 seconds faster than her previous best time. It's the second-fastest performance in Montgomery County this season (behind only Abigail Green).

Hailey Steier (Liberty, Sophomore): Won the 800 at the Emerging Elite Invitational. Broke out under the Friday Night Lights at Reservoir High School, cracking 2:30 in the 800 for the first time. It's the fifth-fastest time by a sophomore so far this spring.

Bolu Toriola (Glen Burnie, Senior): Won the long jump at the Gator Invitational. It was a major breakout meet all-around on Saturday for Toriola, as he bumped his personal best up from 19'4.50 to 21'4.25 to capture the win. He also recorded a personal best in the triple jump (38'8.00).