Mount De Sales freshmen Juliette Whittaker continues to amaze as she closed out her historic 9th grade campaign of track breaking the Maryland high school state record at 800 meters with a runner-up finish in the championship girls race at New Balance Nationals on Sunday. Whittaker battled with Virginia homeschooled star and sophomore Michaela Rose for both laps as they went out in a scorching 60 seconds for the first 400. Rose was just able to hold her off for the win in a US No. 2 2:04.38, but the end result for Whittaker was a new personal best time by over 2 seconds at US No. 5 2:05.24 to take down the prior state record of 2:07.34 set by Nyjari McNeil in 2017. 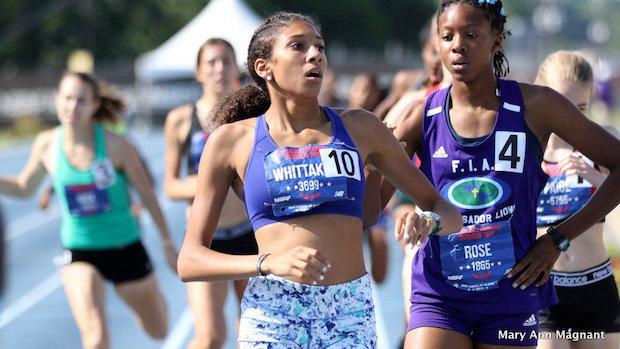 The Brooks PR Invitational was won by another freshmen in Roisin Willis of Wisconsin in 2:04.86 as the future of the event nationally is bright as none of the top 6 fastest girls in the country are seniors including national leader Athing Mu (2:01.38).

There is no question that Whittaker is already in discussion as arguably the greatest female middle distance talent that the state of Maryland has seen at the high school level. Of course, eventual Olympic gold medalist Matthew Centrowitz holds that honor on the boys side.

Who knows the future with Whittaker being only a freshmen, but she is already blazing a path of greatness based on her first year of high school track. She also ran 55.74 for 400 meters, 4:48 for 1600 meters, and 10:50 for 3200 meters in a stellar showcase of range this past year.