Kutztown University hosted the PTXC 12.2 meet on Saturday, Sept. 11 all the way in Kutztown, Pa. Two Maryland teams traveled up to participate, which resulted in a shocking showdown. Ultimately, both the Severna boys and Howard girls took home team titles after dominating their competitors.

For the girls varsity gold race, Howard seniors paved the way to victory with a 4-5-6 finish. Even more impressive was the fact that five of the seven varsity girls placed within the top ten. Elizabeth Holcombe placed fourth with a time of 19:23.70. Right behind were her teammates Nimrit Ahuja with a time of 19:28.10 and Jasmine Wilson with a time of 19:29.90. Sophomore Kiley Mann (19:38.10) was the eight place finisher, while senior Hannah Schwab (19:40.10) was the tenth place finisher. The last two members of the squad included junior Alison Ferris (22:33:00) and senior Margaret Krieg (23:32.40). 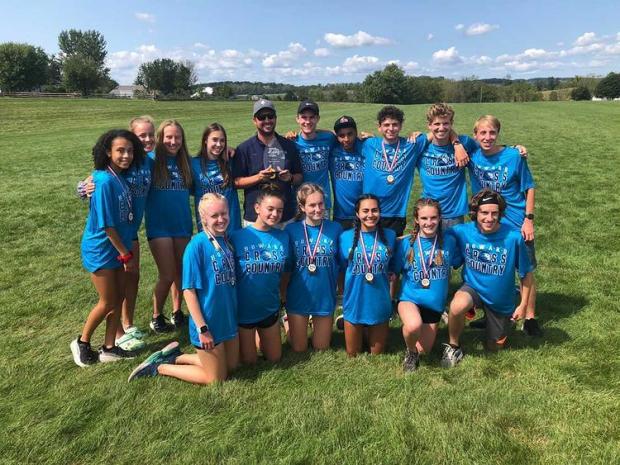 (The Howard team with their first-place trophy, photo courtesy of @nimrit.a1)

The Howard girls continued to impress with a 16-second 1-5 spread and a 19:31 average. This sweep led to Howard's team victory with a mere 33 points. No other team came close as the Howard girls had created a staggering 72-point gap between them and runner-up Governor Mifflin (105 points). Hershey (108 points) ended up taking home third place.

Similarly to how the Howard girls dominated their race, the Severna boys took over theirs as well. The Severna squad was already expected to be the likely winners in the boys varsity gold race, and they followed through. Senior James Glebocki won the race with a time of 15:52.10, just barely edging out Hatboro Horsham's Brian DiCola with a time of 15:52.30. Right behind in third place was Lewisburg Area's Jacob Hess with a time of 15:57.20. Triton Regional's Dennis Fortuna placed fourth (16:02.60). In fifth place was Howard senior Joseph Raudabaugh (16:06.10), another notable Marylander that made the ranks.

It's an amazing finish in the Biys Gold Race at #PTXC12.