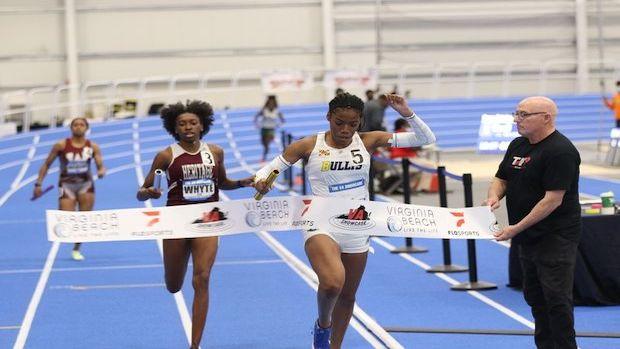 VIRGINIA BEACH, VIRGINIA, Like the boys, the Maryland girls teams shook up the state leaderboards this past weekend with their knockout performances at the VA Showcase. The Bullis School girls showed their dominance as they swept both the 4x200 and 4x400 with U.S. and MD No. 1 times of 1:34.75 and 3:69.60. Bullis has remained one of the most consistent programs in the nation in relay dominance winning both relays at the showcase in U.S. No.1 performances since 2018 with the exception of 2019. Read more about it here.

Individually, Bullis Junior Myla Greene had a busy weekend, featuring in the 55mh, 60mh, 4x200m, and 4x400m relays. The Bullis standout showcased her range as a sprinter by capturing victories and MD No.1 rankings in each event. Specifically, her 55mh time of 7.92 places her at No.5 on the all-time state ranking list. In the top three, remain former Bullis premier sprinters Leah Phillips (7.72), Masai Russell (7.81), and Ashley Wallace (7.94).

Speaking of busy weekends, Katherine Strong of Stone Ridge School of The Sacred Heart ran a grand total of 6 events in the span of three days! The Dartmouth College signee is well on her way to being proclaimed queen of long-distance, claiming MD No.1 times in the 1500m, 1600m, 3000m, 3200m, 1mile, and 2mile runs! Even more impressive than her rankings is that she claimed top-five finishes in each event at the showcase. You can check out her races here below * Katherine Strong showing her racing depth in the Inv Two Mile. 1 out of 6 events she competed in that weekend at The Va Showcase!

More coverage from The VA Showcase