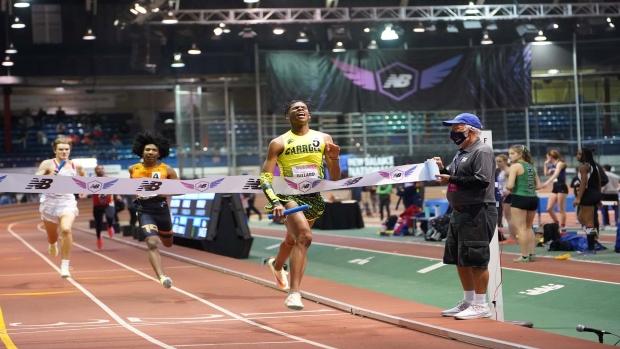 Archbishop Carrol boys had a great weekend at Nationals winning the Championship 4x200!

This past weekend, Maryland sent up some of its best boys throughout the state to rumble with some of the nation's best at the New Balance Indoor Nationals. Here are some of the best performances that came from Maryland athletes!

The action kicked off Friday evening with the 2-Mile Championship Race that featured 4A 3200m champion Luke Coffin and runner-up, Tucker Sangster. Both put up a fight against some of the toughest competition in the nation and placed 63rd and 74th respectively. The Rising Stars 4x200m followed with Springbrook placing 2nd and St. Vincent placing 6th. In the Rising Stars 1-mile, we saw an almost Maryland sweep with Timothy Cherry of Glenelg, Joseph Raudabaugh of Howard, and Tinoda Matsatsa of Northwest placing 2-3-4 in the event. Cherry narrowly missed out on the win by a tenth of a second. Severna Park threw down in the Championship DMR placing 13th overall, ending the action Friday night.

Onto the field events for the night, the triple jump was phenomenal as Donovan Young of Gilman took home the win in dominant fashion and Drew Dillard and Angelo Bowser of Archbishop Carrol snagged 6th and 13th. In the Rising Stars long jump, Isaac McGinnis of DeMatha Catholic placed 9th, and in the Rising Stars pole vault, Brayden Ecker of Gov. Thomas Johnson and Zack Kralec of Hereford placed 10th and 14th.

Day 3 kicked off with the middle-distance runners as we saw many stars in the championship and Rising Stars 800m Christopher Sappe of Urbana, Daniel Wilson of Aberdeen, and Gavin Weddington of Dematha Catholic all placed in the top 10 of the Rising Stars race going 4-6-10, meanwhile, in the Championship race Carter Knox of Manchester Valley and Korede Otusajo of Milford Mill placed 18th and 19th in the Championship sections.

The 200m was up next as Nick C Spikes from Paint Branch placed 6th in the Rising Stars 200m while Nyckoles Harbor of Archbishop Carrol and Aidan McDuffie of Bullis went 3-4 in the 200m Championship Race. Kevin Collins of North Point was your only placer in the 60m for both the Championship and Rising Stars section coming in 5th in the Rising Stars race. The 1-mile championship race then went off with Aiden Neal of Manchester Valley and Antonio Camacho-Bucks of Centennial, both 3A superstars going 16th and 26th and Neal snagging a new PR off 4:10.46 for the full mile.

The 60mh saw two Calvert Hall stars Thomas Smith and Jason Holmes-Williamson place 2nd and 8th in the championship. The last event of the day the 4x400m relay saw Dematha Catholic and Bishop McNamara both send up two relays with Bishop McNamara's two relays placing 16th in the Rising Stars section and 10th in the Championship section, while Dematha Catholic went 4th and 26th in the Championship section. The only field athlete of the day for Maryland was Adam Szatanek of Huntingtown as he placed 18th in a loaded field of shot putters.