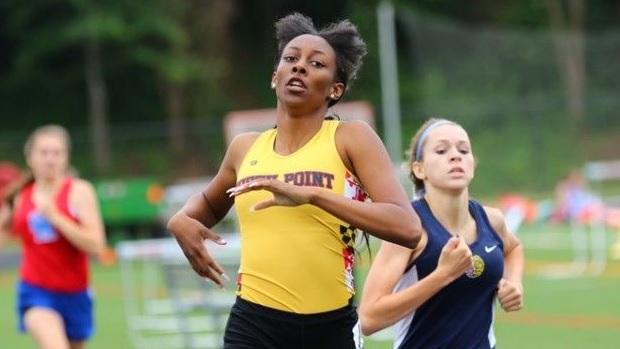 Regionals week gave us plenty of performances to choose from when selecting the top athlete of the week. We narrowed it down to five girls who stood out among the rest. Cast your vote for the top athlete below!
Last year's defending 4A 400 state champion Mallorie Smith showed that she is once again in top form with a double victory in the 200 and 400 at the 4A East Regionals. She also set season bests in both the events, and now ranks fifth in the entire state in both events.
Way out west, Allegany's Aubree Boyle was dominant at the 1A West Regionals where she swept the 100, 200 and long jump. She now leads the 1A classification in all three events heading into the state meet. Elizabeth Seton's Lauren Morgan also had a great weekend in the sprint events, winning both the 100 and 200 at the WCAC Championships. Her 23.99 time in the 200 is currently the fastest time so far in Maryland this spring.
The list wraps up with a pair of 3A competitors. First, Baltimore Poly's Nadia Hackett solidified her status as the favorite for both hurdle events for the state championships with victories in both at the 3A North Regionals. She threw in a win in the triple jump to boot, as well. Over at the 3A East Regionals, Atholton sophomore Alexandra Hargrett ran a MD #5 800 to back up her win in the 1600 earlier that day. She will certainly be a contender in both events at the 3A state meet.