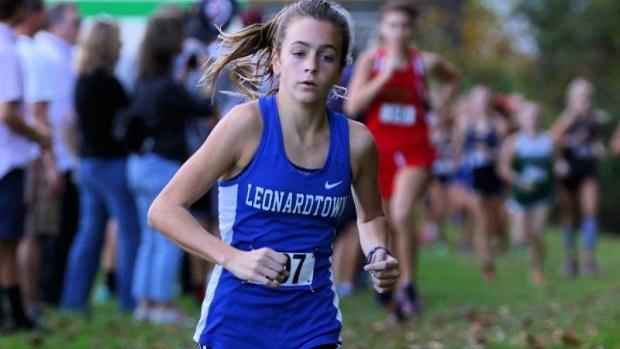 The four 4A regional meets on Thursday afternoon set the stage for next weekend's state meet. Here were the biggest moments and storylines.

Nelle Ray Shakes Up The 4A Scene

The 4A East girls race had shaped up to be a rematch from the Anne Arundel County Championships where three girls finished between 17:56 and 18:07. But another name was included on the list of contenders for Thursday's race: Leonardtown freshman Nelle Ray, coming off a big victory at the SMAC Championships. Ray proceeded to win her third straight major race at Arundel High School yesterday, an event that shakes up the 4A scene. Abigail Green will still be the favorite, but Ray may be at the front of the chase pack. Her victory also cements her status as the top freshman in Maryland this season.

4A West Boys Race Leaves Us With More Questions Than Answers

B-CC's Adam Nakasaka won the 4A West boys race at Watkins Mill, which turned out to be about the only thing that went as expected. Behind Nakasaka's victory the B-CC boys leaped over Wootton and Whitman (who beat them at the county championships), defeating the Vikings by one point. Nakasaka was followed by a Richard Montgomery runner, but this time it was Garrett Suhr (who had finished in sixth at counties) and not Mark Unger (the runner-up at counties). The Einstein boys missed one of their top runners and went from 30 points out of first at counties to tenth out of 13 teams at regionals.

A few weekends ago the Northwood junior finished just six seconds behind Ryan Lockett at the Montgomery County Championships. He then paced the field at the 4A North regionals on Thursday, finishing four seconds ahead of Howard's Nick Deamer. Feda will certainly be a contender next weekend at Hereford, but the better answer to the question is probably that there is no favorite this year. Nakasaka, Suhr, Unger, Feda, Deamer and Severna Park's Garrison Clark will all enter Saturday with a decent shot at walking home a state champion.

Three more top-five-state-meet hopefuls squared off at the 4A North regionals on Thursday. Blair's Morgan Casey, Paint Branch's Yasmine Kass and Urbana's Brin Strouse matched each other nearly stride-for-stride as they made their way around the perimeter of the Baltimore Agricultural Center. The race was still neck-and-neck (and neck) with about 200 meters to go when Casey found one extra gear to turn the final corner and sprinted for the victory. It was easily the closest girls race of the day on Thursday and a sign that all three girls will be among those shooting for a top spot on the state meet podium.

The Walter Johnson girls continued their quest for a fifth straight state title by winning the 4A West regional trophy, but it wasn't easy. With the Wildcats down a runner, the Wootton girls turned a 46 point gap from the county meet to an 11 point gap at regionals. The WJ girls showed that they can still get it done without their entire lineup, but it makes the team battle at next weekend's meet a bit more interesting. Meanwhile the Severna Park boys turned in perhaps their most dominant effort to date, sweeping the top five spots at the 4A East regionals. They will enter next weekend's race with a ton of momentum as they look to grab the top spot at states for the first time since 2014.