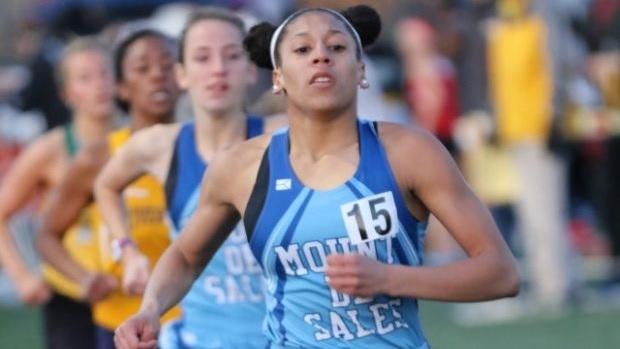 Mount de Sales sophomore Bella Whittaker seemed to take to the 800 kindly in her event debut last Friday, cracking 2:20 in a runner-up effort at the Scorpion Classic. (Photo by Craig Amoss)

Elian Ahmar (Broadneck, Senior): Won the discus at the North County Knights Invitational. Threw 160'11, a 21-foot personal best and the second-best in Maryland so far this spring. Had the shot put nailed down to a science this winter, and now appears to have mastered the discus as well and appears to have the top claim to the title of best thrower in Maryland.

Genevieve DiBari (Stone Ridge of the Sacred Heart, Senior): Second in the 1600 at the McNamara Mustangs Invitational. 5:12 effort was a personal best time by eight seconds and sits at the #4 spot on the current state leaderboard (also the top private school 1600 time in the state).

Devan Hudson (New Town, Senior): Third in the 200 and fourth in the 400 at the Clash of Baltimore. Owings Mills transfer cut nearly a full second off of his 200 personal best from 23.14 to 22.19 in his first outdoor season at New Town. Joined Jordan Cofield and Brandon James to form one of the top sprint trios in the state this season.

Deborah Obadofin (Gov. Thomas Johnson, Sophomore): Won the triple jump at the Talley-Zimmerman Invitational. In just her second triple jump competition, posted a performance of 35'11, almost two feet better than a week before at the Jim Vollmer Invitational. Now holds the MD #9 mark and the top spot in Frederick County.

Zamar Robinson (Tuscarora, Senior): Won the 100 at the North County Knights Invitational. Shaved more than three-tenths off of his personal best, from 11.38 down to 11.06. Is now the sixth-fastest time among 3A competitors so far this spring.

Evan Schaefer (Oakdale, Junior): Won the 400 at the Talley-Zimmerman Invitational. Already had a breakout earlier this spring in the 800, but cut nearly two seconds off of his 400 meter personal best on Saturday to join the ranks of the Maryland elite in his second event. 49.33 is the fourth-fastest time in the state so far this season.

Isaiah Smith (Chopticon, Senior): Won the high jump at the Battle of the Beltway Invitational. Had been stuck on six feet in the event since last spring before erupting for a big 6'4 performance on Saturday. Only five boys in Maryland have gone higher than 6'4 so far this season.

Bella Whittaker (Mount de Sales, Sophomore): Second in the 800 at the Scorpion Classic. Went 2:19.56 in her first 800 effort, coming off an IAAM title in the 500 meter dash this winter. Her performance puts her in the #7 spot on the state leaderboard and is the top mark in the IAAM so far this year.

Darien Winston (Parkville, Junior): Won the 110 hurdles at the Battle of the Beltway Invitational. 15.47 effort in the prelims was his first time going under 16 seconds in the event and a top-30 time in Maryland at this time, and the top time in Baltimore County.