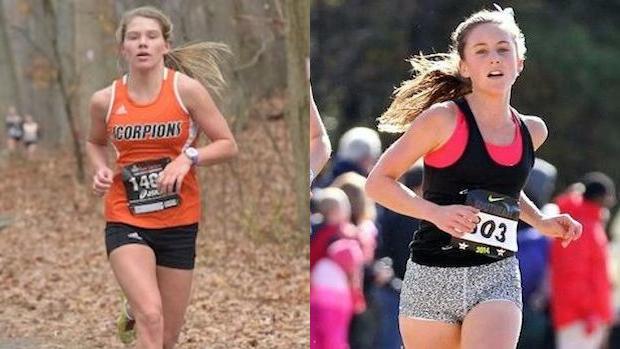 Next weekend at the Brunswick Invitational, two of the state's best will face off in Brit Lang of Oakland Mills and Maria Carberry of Urbana.

We are as anxious as you all are for the start of the cross country season with the first big weekend of invitational meets only one week away. What better way to look ahead to some of next week's top invitationals including the Brunswick Invite, Interstate Classic, and Seahawk Invite than providing virtual meet previews of each meet based on the current teams attending list.

Virtual meets previews are based on using times in the database to "virtually" score a meet either based on last year's 5K times in early season meet or current season's 5K times in later season meets once most teams have gotten a 5K race in or two.

Lots of cool customization features as well for the users to adjust times or remove runners from the virtual meet preview. Know a kid is missing a race due to injury or SAT test? You can take them out of the scoring. Know a team is sitting their entire top 7 lineup? You can simply X out of each of their top 7 runners so the team scoring accurately will reflect that. You can also instead of use the best times in the database use the average times of each runner over the course of the season.

Virtual meet previews will be a common feature published on the site on Thursdays and Fridays leading into invitational weekends after we get final team lists from meet directors. We will still be doing our written insightful previews as well, but virtual meet previews are the next best thing to a track meet's performance list in cross country!