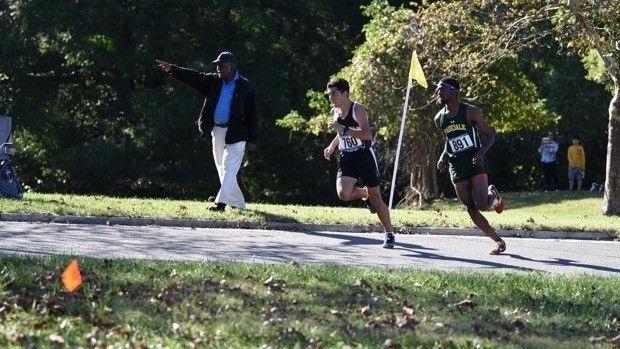 As has been the case all season, Wednesday's PG County Championship boys race went down to the wire in a matchup between two seniors: Parkdale's Jonathan Johnson and Roosevelt's Dennis Miranda-Cruz. (Photo by Brandon Miles)

Senior Jonathan Johnson and the Parkdale boys defended their 2016 team title at Fort Washington on Wednesday, averaging under 18 minutes for their 1-5 runners. Senior Jonathan Johnson led the way as he went head-to-head with Roosevelt's Dennis Miranda-Cruz the entire time, nearly a minute ahead of the rest of the field. A random tidbit: seven of the top ten boys finishers had first names beginning with the letter "J".

Javon Watts Takes Over For The Second Consecutive Year

A year after running away with the PG County girls' title as a freshman, Flowers' Javon Watts was back at it on Wednesday afternoon. She led the Jaguars to another county team title by putting more than a minute between herself and the second-place finisher. That second-place finisher was Friendly mid-distance track star Antoinette Bradley, who turned in a huge personal best 5K performance.