Loading
(Watch a feature on the Howard team from their home meet)
Video: Zoey Scott

The Howard girls squad has been dominating the cross country season. They've got multiple first-place wins as a team under their belt, which has helped them become the number 1 ranked girls team in Maryland -- and the competition isn't even close. 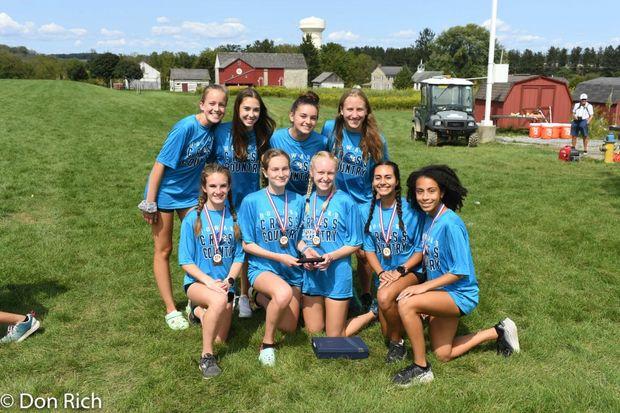 (The Howard girls pose with their team trophy) After a solid performance at the PTXC 12.2 meet, the girls went on to dominate the Girls Elite Varsity Race at the 2021 Bull Run Invitational. First, Ahuja had an impressive finish; She fought against Hereford's Estelle Snider and James Hubert Blake's Ella Zeigler for the second-place spot, and she got it. Ahuja took second with a time of 19:57, and the rest of her teammates were right behind: Elizabeth Holcombe (5th, 20:06); Kiley Mann (6th, 20:08); Jasmine Wilson (9th, 20:34); Hannah Schwab (11th, 20:34). As expected, the team was victorious, taking home another first-place win as a team. This time the squad scored 29 points. Once again, the team's points could be tripled, and they'd still be in first. The team continued its streak of domination with yet another team title. This time, the girls crushed it at their own home turf. They got a perfect score after going 1-2-3-4-5. Nimrit Ahuja and Kiley Mann went neck-in-neck, but Ahuja was able to outkick Mann for the win. Ahuja finished first with a time of 19:14.0, while Mann finished second with less than a second to spare in 19:14.4. The rest of the pack finished close together with Elizabeth Holcombe as the third-place finisher with a time of 19:19.8. Jasmine Wilson was right behind in fourth with 19:20.2. Hannah Schwab rounded out the podium for fifth and a time of 19:23.5. Overall, the girls scored a mere 15 points, the lowest possible. Atholton followed with 40 points and Centennial finished third with 85 points. (The girls huddle around before the race in a team chant) Just like the Howard Tri-Meet, the girls swept the 2021 Howard County XC Championships. The varsity squad ended up going 1-2-3 (and almost 1-2-3-4-5) in the Girls Varsity Race. Nimrit Ahuja led the pack with a first-place finish and a new meet/course record of 18:21.8. The previous record was held by Oakland Mills' Brit Lang when she ran a time of 18:28.14 at the 2015 Howard County XC Championships. The next Howard athlete was Elizabeth Holcombe finishing second with a time of 18:26.30, which also surpassed the previous meet/course record. The third-place finisher was Kiley Mann with 18:47.30. Hannah Schwab took fifth with 19:00.50 and Jasmine Wilson followed with 19:10.30. An honorable mention for Arshia Mondal who placed first in the Girls JV Race and would be sixth for the Howard girls. In the end, the Howard girls were declared the winners and took their fourth county championship title in a row after scoring just 17 points. (Hear from the Girls Varsity Champion and Runner-Up, Nimrit Ahuja and Elizabeth Holcombe) The most recent meet where the Howard girls excelled was the 2021 MPSSAA 3A East Region Championships. The girls were expected to dominate, and they did just that. In the Girls Varsity Race, Nimrit Ahuja led the girls once again. Ahuja had just beaten the previous meet and course record the week before at the Howard County Championships at Centennial High School. Then, at the same course for the regional meet, she did it again. Ahuja broke her own course record, as well as the meet record (previously held by River Hill's Jasmine Tiamfook [19:09.44] from the 2016 MPSSAA 3A East Region Championships). With a blistering time of 18:13.30, Ahuja took first place. To add, the Howard girls didn't just take the individual title but spots 1-5 as well. They went 1-2-3-4-5 for a perfect score for the second time this season: Nimrit Ahuja (1st, 18:13.30); Kiley Mann (2nd, 18:24.40); Elizabeth Holcombe (3rd, 18:30.40); Hannah Schwab (4th, 18:33.50); and Jasmine Wilson (5th, 18:36.10). Their last two runners also impressed, both finishing in the top 30: Lola Sivley (26th, 20:55.20) and Alison Ferris (29th, 21:00.20). Six of the seven girls ran a season-best. The girls won the team title with a mere 15 points, the lowest possible. (The girls embrace each other after a successful race)

(Hear from the top five runners from Howard's varsity squad about the regional race)
2021 Maryland XC Invitational: Results I Meet Recap I Photos I Videos
For the boys, Joseph Raudabaugh has been the team leader throughout the season. Raudabaugh is currently ranked #4 in Maryland after winning the 2021 Maryland XC Invitational with a time of 15:30.00, which happened to be the course record, a school record for Howard, and his personal best.
(Hear from Howard's Joseph Raudabaugh about his season so far)
2021 PTXC 12.2: Results I Meet Recap I Photos I Videos
One of Raudabaugh's earlier performances for the 2021 XC season was at the PTXC 12.2 meet in Kutztown, Pa. Raudabaugh, one of the few Maryland runners at the meet, made a name for himself with a breakthrough performance. He finished fifth with a time of 16:06.1. Raudabaugh performed exceptionally well at the 2021 Bull Run Invitational, despite its rough terrain and steep hills. He ran in the Boys Elite Varsity Race, among some of Maryland's best. He ended up taking fourth with an impressive time of 16:31.8. 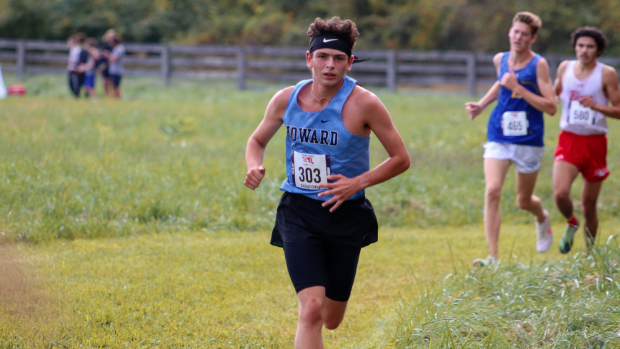 Joseph Raudabaugh improved on his times as demonstrated by his performance at the 2021 Maryland XC Invitational. Originally, Dulaney's Tyler Dailey led the race with Raudabaugh following closely behind. However, the two were neck-in-neck in the last stretch of the race. The two bolted to the finish line and they both tied with a time of 15:30.00. Raudabaugh was declared the winner and now holds the course record. This time was also a PR for him and a new school record. 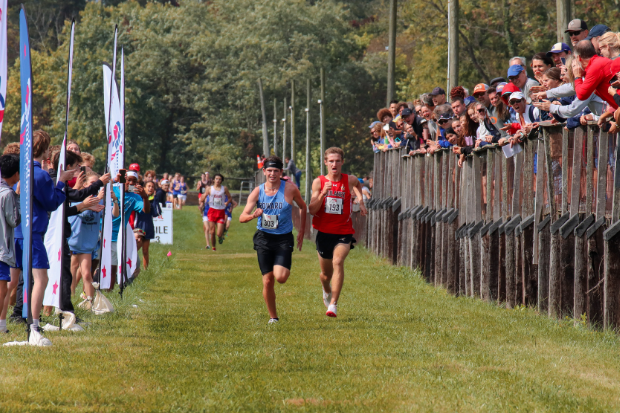 Raudabaugh's first-place finish paved the way for the rest of his team. The boys' team ended up in third (107 points) for team title behind Winston Churchill (73 points) and Loyola-Blakefield (61 points). (The Howard boys huddle before the race with a team chant)
Photo: Zoey Scott
For the county championship, Raudabaugh snagged second place behind Centennial's Antonio Camacho-Bucks. Raudabaugh finished with a time of 15:43.10 and helped lead his team to fourth place with 110 points. Raudabaugh had an impressive performance at the regional championships. He placed third with a new 3 Mile PR of 15:22.70. He helped get his team a fourth-place victory with 99 points. (Raudabaugh smiles after a new PR)