Loading
The 2021 MPSSAA 1A Region Championships were held on Thursday, Nov. 4. All four sections (1A East, 1A North, 1A South and 1A West) competed in different regions in Maryland.

The 1A East Region Championships were held at the Fair Hill Racetrack in Elkton, Md. Athletes from across 12 different schools raced in the meet that would determine which teams would become state-qualifiers. For the Boys Varsity Race, it was expected to be a battle between three athletes: Bohemia Manor's Day Leone, Fallston's Alex Xavier, and Cambridge-South Dorchester's John Condon. Based on current 5K performances, it was predicted that Leone would take home the individual title and it turned out to be a correct assumption. Leone won the race with a time of 16:45.37, just missing the current meet record by about eight seconds. The second-place and third-place finishers were right on Leone's tail. Xavier and Condon were neck-in-neck, both fighting to take second place. However, Xavier was able to outpace Condon by just one second. Xavier finished second with a time of 16:49.27, while Condon took third with a time of 16:50.58. For the rest of the top 5, two more Fallston athletes made in within the top ranks. Quinn Daly became the fourth-place finisher with a time of 17:38.40. His teammate, Bryce Kahler, finished fifth with a time of 17:59.87. Regarding the team title, Fallston took home the top honors with ease. Overall, they had four athletes within the top 10. Junior Antonio Hernandez was the team's fourth athlete with an eighth-place finish and time of 18:27.24. Their domination in the Boys Varsity Race gave them a score of 35 points, as well as the first-place award. The second-place team was Bohemia Manor, led by Leone, with 61 points. Although the team did not finish first, they still put on an impressive performance as a team with three of their top runners within the top 10: Day Leone (1st, 16:45.37); Noah Beck (7th, 18:25.62); and Samuel Dickerson (10th, 18:30.65). The third-place team was Patterson Mill with 79 points. On the girls' side, Fallston took both the individual title and the team title. Fallston's Emily Atha was victorious with a first-place finish and a time of 19:54.93. She dominated the race as she had an incredible lead of over 2 minutes and 40 seconds! She was also the only girl to run sub-20, sub-21 and sub-22. After Atha, the rest of the top five became a battle between Fallston and Havre de Grace. The second-place finisher was Havre de Grace's Lillian Alexander with a time of 22:39.62. After, it was another Fallston athlete with Megan Willats in third with 22:50.96. Then, it was back to Havre de Grace with Mackenna Senko taking fourth with 22:55.59. The fifth-place spot ended up going to another Fallston athlete as Anita Garcia secured the last spot in the top 5 with a time of 23:09.37. The 1A North Region Championships were held at Herring Run Park in Baltimore, Md. Athletes from across six different schools from the Baltimore area competed against each other, which severed as an end-of-season test for the upcoming state championships.

On the boys' side, Paul Laurence Dunbar swept the competition taking both the individual and team title. The team's first athlete to place was junior Elijah Boulware. Boulware won the race with a time of 20:45.40. The second-place finisher was close behind. Frederick Douglass-BC's Diamonic Wright followed Boulware and ended up finishing second with a time of 20:49.50. To add, Boulware and Wright were the only athletes to run sub-21 for the meet. The third athlete to join the ranks was Reginald Lewis' Anthony Johnson. Johnson secured the third spot with a time of 21:00.16. Then, another Dunbar athlete placed within the top 5. Dunbar's Timothy Parrish finished fourth with a time of 21:38.18. He was followed by Coppin Academy's Elijah Nelson in fifth with 21:48.07.

Dunbar took another first-place title after scoring a mere 15 points (a perfect score!) in the Girls Race.

The 2021 MPSSAA 1A South Region Championships were held at Fort Washington Park in Fort Washington, Md. There were 10 different schools that competed in the meet. 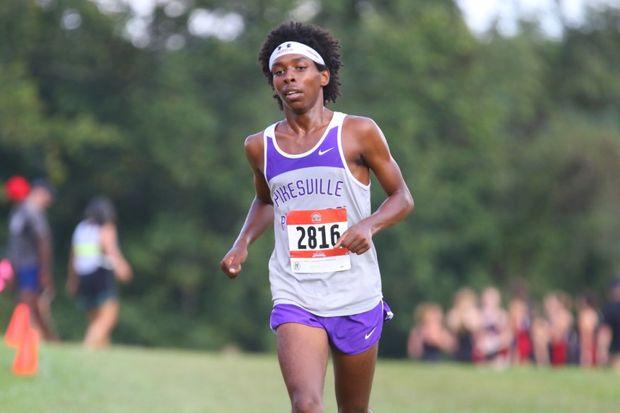 For the Boys Varsity Race, it was estimated that Pikesville's Kaleb Berhanu would be declared the champion based on his current 5K performances. This prediction came true as Berhanu was victorious. Berhanu finished first in the race with a time of 18:20.70. Loch Raven's Aidan Geron followed close behind, just eight seconds away from Berhanu. Geron ended up as the runner-up after finishing second with a time of 18:28.10. The rest of the top 5 spots were taken by the Francis Scott Key boys. Junior Noah Fisher led the FSK team with a third-place finish and a time of 18:55.10. His teammates, freshmen Ben Hasty (19:02.60) and Cody Volz (19:04.80), followed behind in third and fourth place, respectively.

The boys had a plan today. Each and every runner executed that plan to perfection. Special shout-out to our #5 runner, Brenden Bosley, who solidified the win with his huge race. Now onto #States #FSKXC pic.twitter.com/WHfzLaM4pO

After taking three spots within the top 5, it was evident that the Francis Scott Key team would become the 1A South Region Champions. They also managed to get a fourth athlete within the top 10 as junior Logan Aldrich secured the 10th place spot with a time of 20:08.80. The second-place title went to South Carroll after they put on an impressive performance with 44 points. The South Carroll team placed three of their top athletes within the top 10: Benson Sommerfeldt (6th, 19:06.60); Camden Larson (7th, 19:08.30); and Jacob Gooding (8th, 19:39.10). The third-place title went to Loch Raven, led by Geron, with 62 points. (Alexander Contreras pictured during the 2021 Patriot Invitational)
Photo: Patrick McKinney
For the Boys Varsity Race, Catoctin's Alexander Contreras dominated the race. Contreras finished first in the race, winning with a time of 16:54.50. He was the only athlete to run sub-17 for the meet. The runner-up was Brunswick's Ray Gibson, finishing second with a time of 17:17.70. The third finisher was Smithsburg's Sean Milligan close behind Gibson with a time of 17:22.70. The last two spots in the top 5 were filled by two more Brunswick athletes. Caleb Shullenbarger finished fourth with 17:38.70. His teammate, Andrew Mcgillivray, finished fifth with a time of 17:46.60.
Regarding the team title, the Brunswick boys walked away with the top honors. Senior Colin Bomysoad finished ninth with a time of 18:10.80 to become their fourth athlete to place within the top 10, which helped secure their victory. The second-place title was a battle between the Smithsburg and Northern Garrett boys. However, the Smithsburg boys got the upper hand after placing two boys within the top 10: Sean Milligan (3rd, 17:22.70) and Cameron Rejonis (10th, 18:19.60). The Northern Garrett boys finished third with 76 points. (Caroline Matthews pictured during the 2021 Frank Keyser Invitational)
Photo: Craig Amoss
For the girls, Boonsboro's Caroline Matthews was victorious with her seventh first-place win for the season. Matthews has been on a winning streak all season long, and she was expected to dominate this end-of-season meet. She won the race with a time of 19:09.70, which granted her a lead of almost a minute. She was also the only girl to run sub-20 at the meet. The next athlete to finish was Northern Garrett's Lydia Nelson, taking second with a time of 20:07.00. She was followed by Mountain Ridge's Mary Delaney who took third with a time of 20:21.30. Not far behind Delaney was Catoctin's Jenna Conley, finishing fourth with a time of 20:25.10. Smithsburg's Cora Gentzel rounded out the podium as she secured her fifth-place finish with a time of 20:59.80.
The Northern Garrett girls, led by Nelson, ended up taking the team title after scoring just 43 points. Smithsburg, led by Gentzel, followed with second-place and 81 points. Boonsboro, led by girls race champion Matthews, finished third with 113 points.
Tweets by MileSplitMD