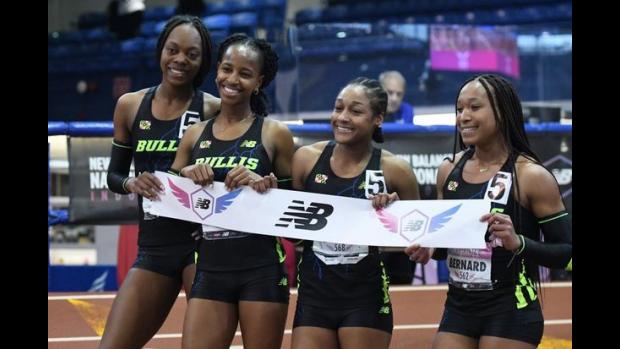 Bullis girls posing after notching one of their many wins of the meet!

This past weekend at New Balance Nationals in the New York Armory, Maryland sent up some of its best girls and they did not disappoint. With multiple national caliber and state-leading performances, we saw some extremely fast times come out of the state's best.

If there was a team title, Bullis would have been the winner. Bullis's dominance in the sprint events has been known for years but the caliber of which they dominated at Nationals is unprecedented. Some of the team's performances at the meet include:

-6th in the Championship 400m thanks to Sage Hinton

-1st in the Championship shot put thanks to Trinity Franklin

-1st in the Rising Stars long jump thanks to Reagan Schwartz

-5th in the 60mh Championship thanks to Myla Green

With dozens of national titles and wins throughout the 3 day meet, Bullis had the most successful showing out of any team across the nation with only a handful of girls to boast as well.

However, besides Bullis, there were multiple other national-caliber performances to recognize. Myla Abernathy of Catonsville went head to head with Leath of Bullis and managed to grab 5th in the Rising Stars 800m with Mary Gorsky of McDonough and Evelyn Rogers of Elizabeth Seton placing 22nd and 21st respectively. In the Rising Stars 200m, Janiya Glass also of Elizabeth Seton came up just short of the win with a time of 25.01. The girl's championship 1600m was loaded as we had the state's best in Juliette Whittaker of Mount De Sales place 1st with a blistering time of 4:37.23, holding off some of the nation's best milers to claim the national title. Also featured in the race, Katherine Strong of Stone Ridge School and Ella Zeigler of James Hubert Blake placed 13th and 36th respectively going sub-5 in the process. In the Rising Star's 4x400m, Bishop McNamara came 3rd right behind Bullis with Blake also coming in 16th. In the Rising Star's 2-mile, Ella Zeigler was featured once again placing 38th with Leah Stephens of Good Counsel placing 56th as well. Alethia Carroll of Crofton capped off the girl's top performances with a 3rd place finish in the shot put.